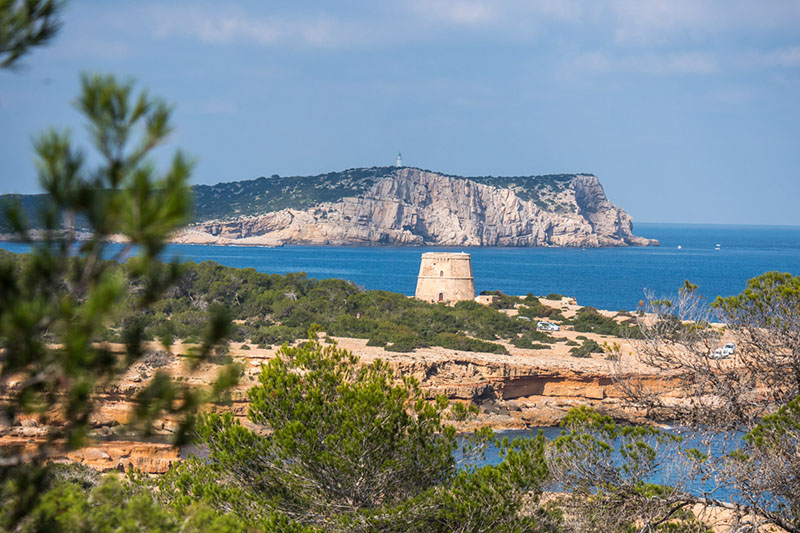 These towers were built between the 16th and 18th centuries with the purpose of protecting the Ibizan population of the comings and goings of Turkish pirates, and later on of the British, French and Dutch troops. The towers were built in high spots of the island and close to beaches where the enemy landings were more easy. Furthermore, the defence towers were complemented with other interior watchtowers located in nearby vantage points and interior fortifications to establish a communication network through the sound of a horn or with smoke and fire signals they announced potential pirate attacks so that the people could take refuge.

Sant Josep de Sa Talaia stands out by concentrating many of the towers that remain in good conditions. These towers are located in what today are considered privileged places worth visiting where you can enjoy great views and for going deeper into Ibiza’s history. 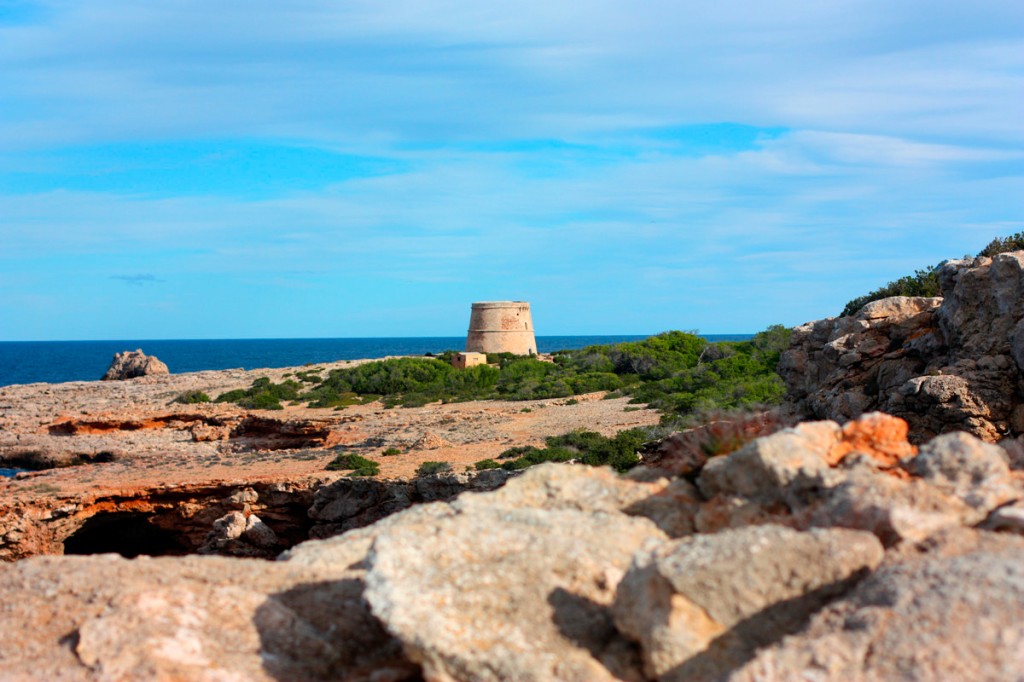 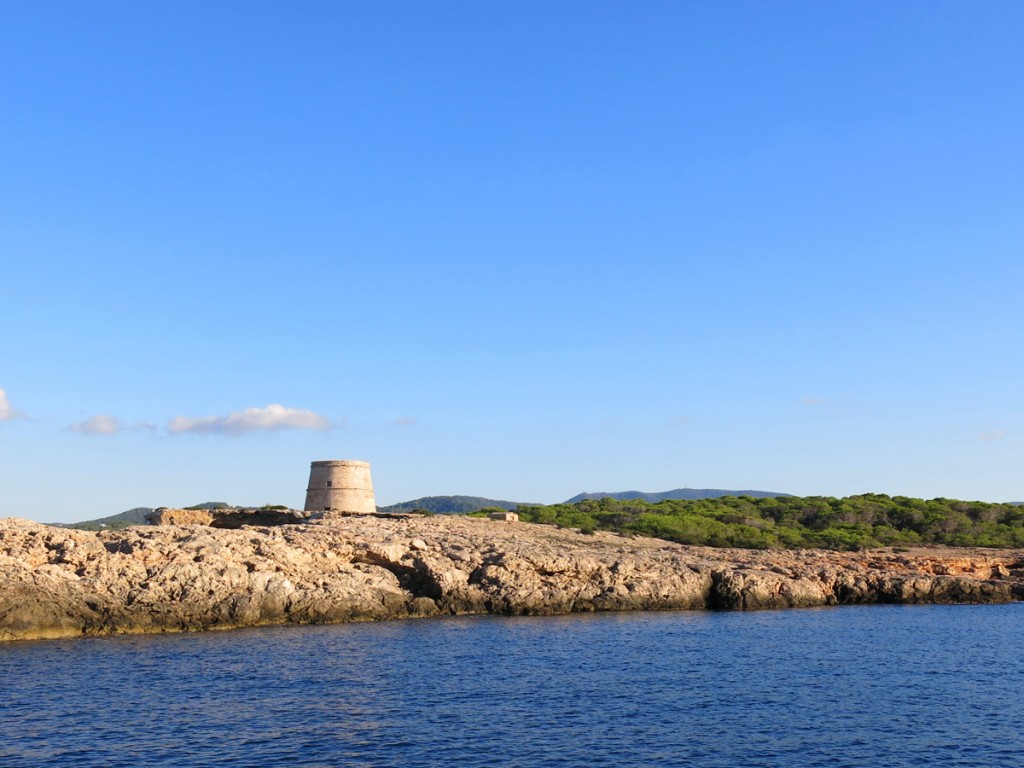 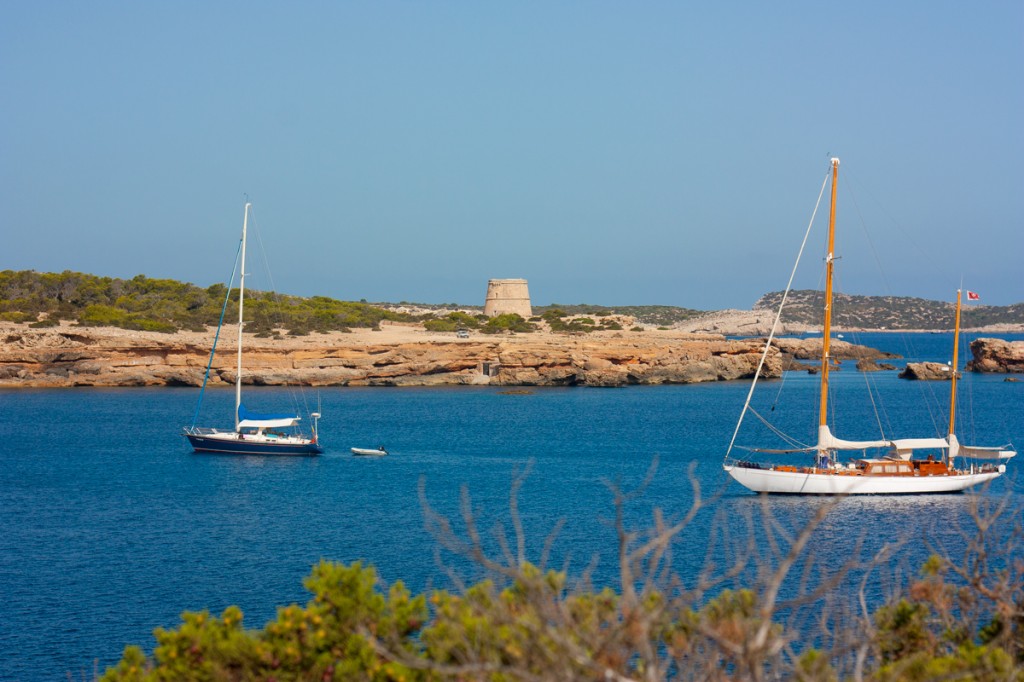 Coastal defence tower built on the point d’en Rovira, in the area of ses Roques Males and opposite the island of sa Conillera, in the westernmost area of the Portmany Bay. The main difference between this tower and the rest is that this one is a first category tower, this means that it has a greater height and diameter, while retaining the proportions. Built in 1763, it’s a frustum shaped tower and offers spectacular views overlooking the Illots de Ponent (islets of the west) and in the opposite direction you can see a beautiful view of the Bay of Sant Antoni. This tower is easily accessible, located east of Platges de Comte and which was a vital watchpoint of the port of Sant Antoni. 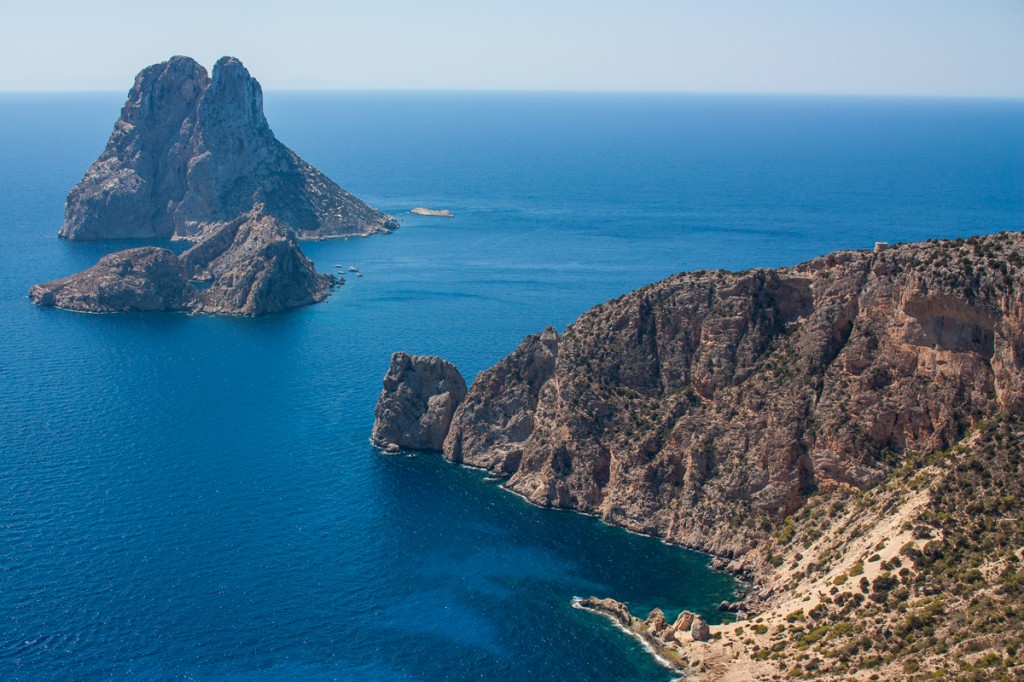 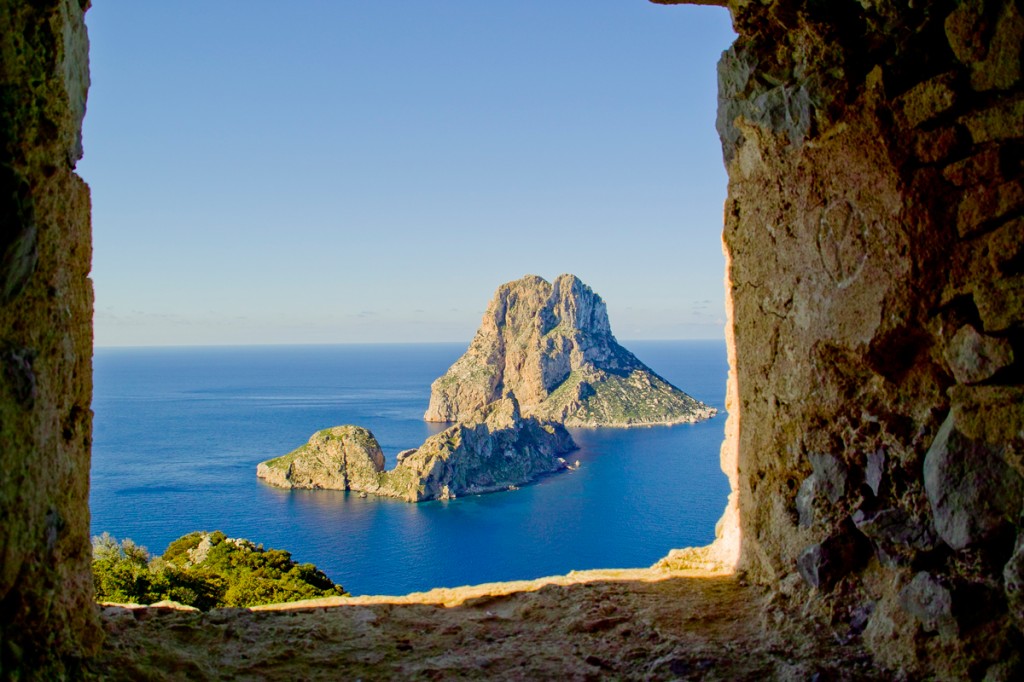 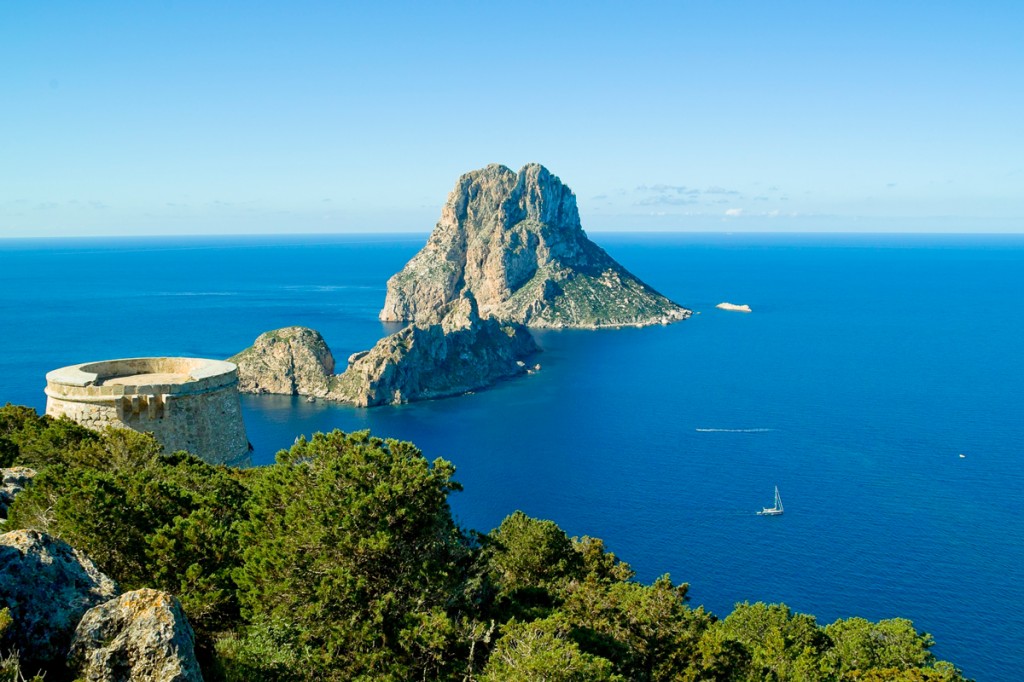 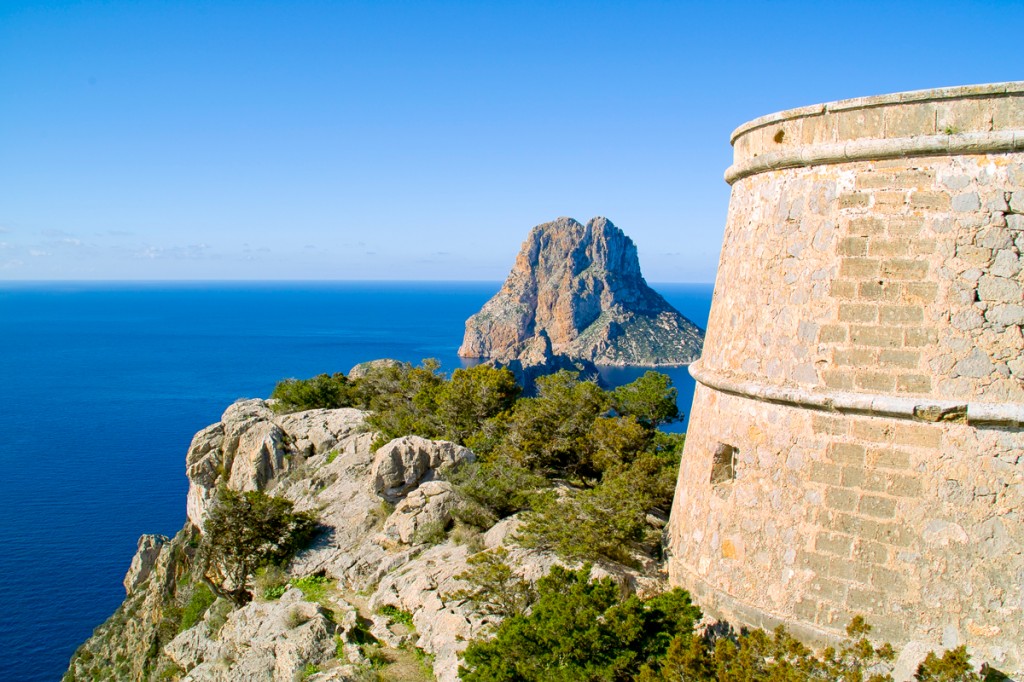 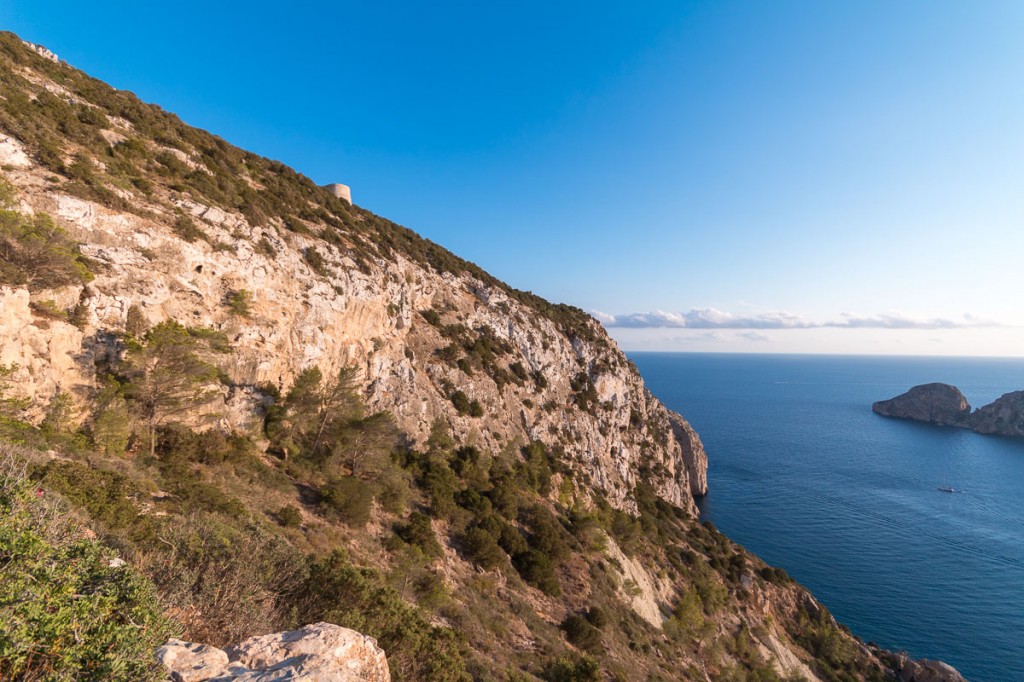 This watchtower is also known as Torre del Pirata. It was the key element in the famous novel of Valencian writer Vicente Blasco Ibáñez “Los muertos mandan”, set in Ibizan rural life in the early 19th century. It is probably the most photographed tower in Ibiza thanks to its high position and fantastic views to the island of Es Vedrà. It’s located on the cliffs south of Cala d’Hort beach, in the heart of Cala d’Hort Nature Reserve, and it’s one of the few towers that can be accessed inside. 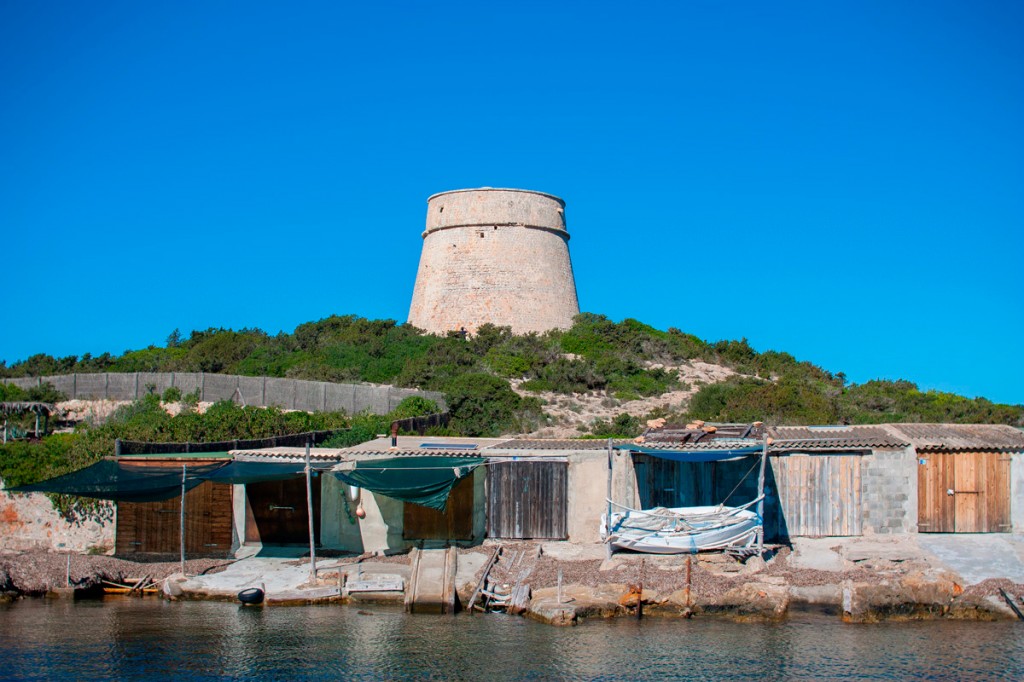 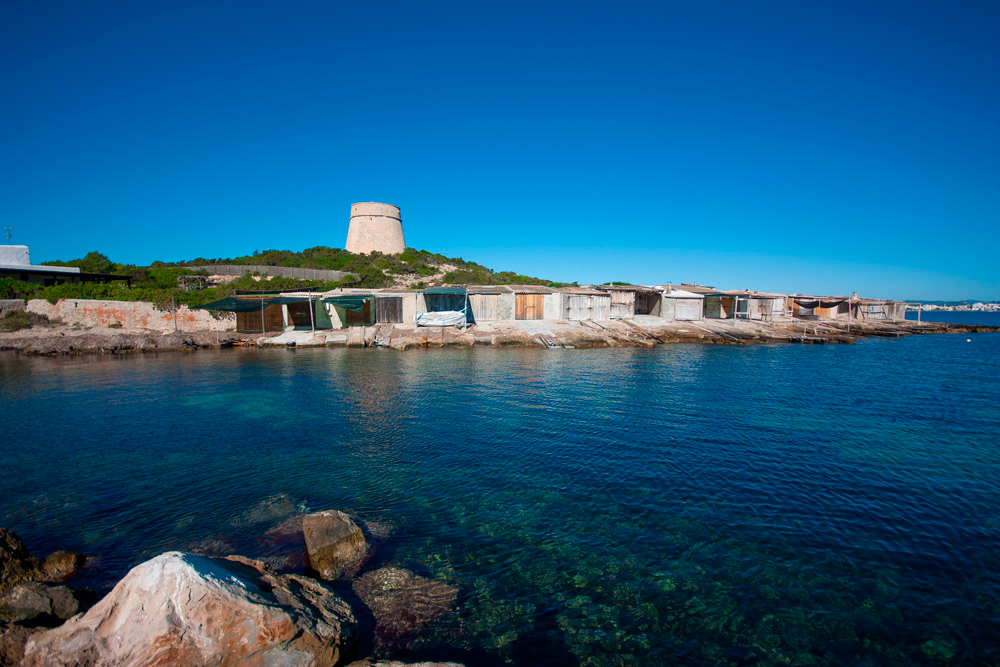 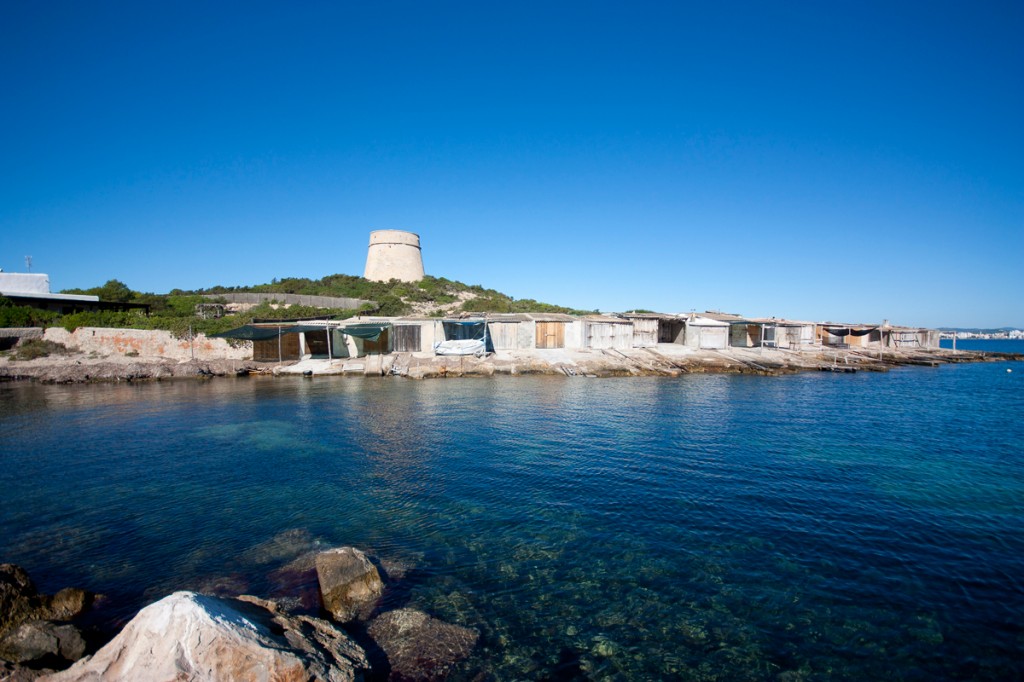 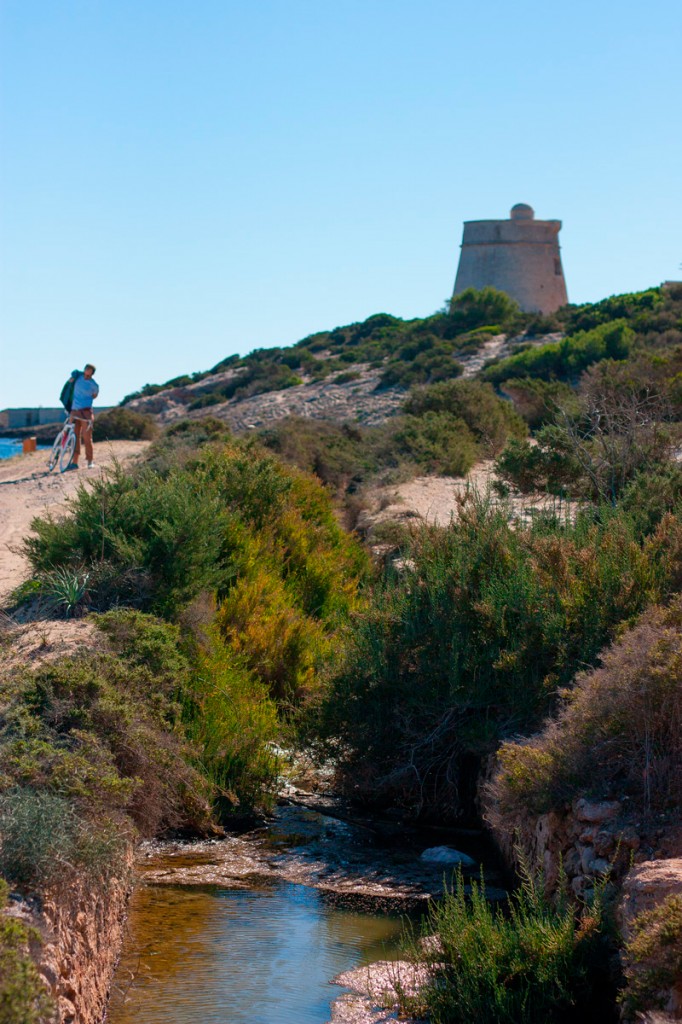 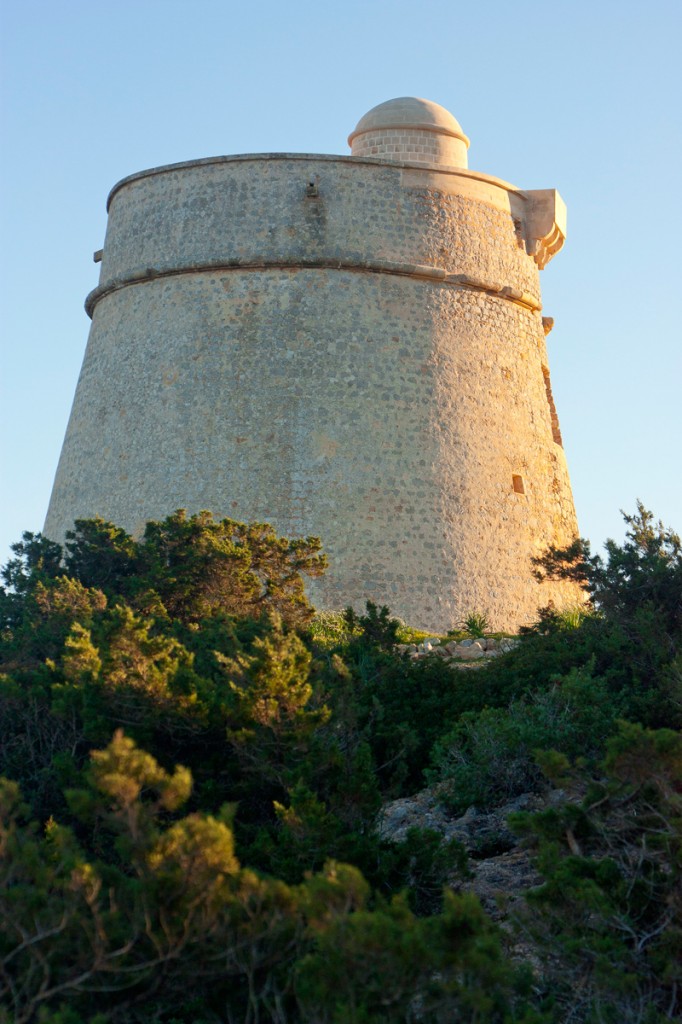 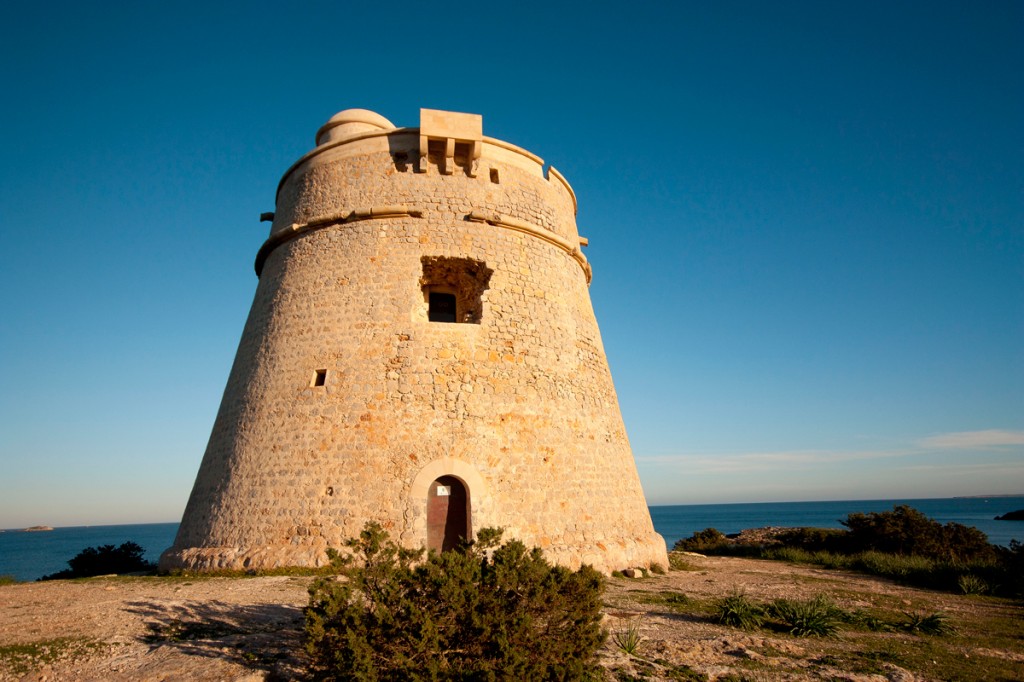 One of the architectural treasures of the Natural Park of Ses Salines, this defence tower was built in the 16th century to protect the inhabitants of Ibiza and the workers of the salt ponds from possible lootings of Turkish and North African pirates. Since at that time the salt production was the main source of wealth of the island. Sa Sal Rossa was the only watchtower which had a civilian purpose having a large interior compartment with a capacity of about 200 people. Located south of Platja d’en Bossa and within the limits of the Natural Park, it’s one of the oldest defence towers, the first notice recorded of the tower is in a letter from the king to the governor dated in 1575. Below the tower you can see the typical fishermen huts where the fishermen of area still use for shelter their traditional fishing boats, known as llaüts. If you you climb the mound behind the tower, you can see fantastic views of Playa d’en Bossa. Back on the road, on your right, past the tower, you’ll see the first salt ponds in the park. 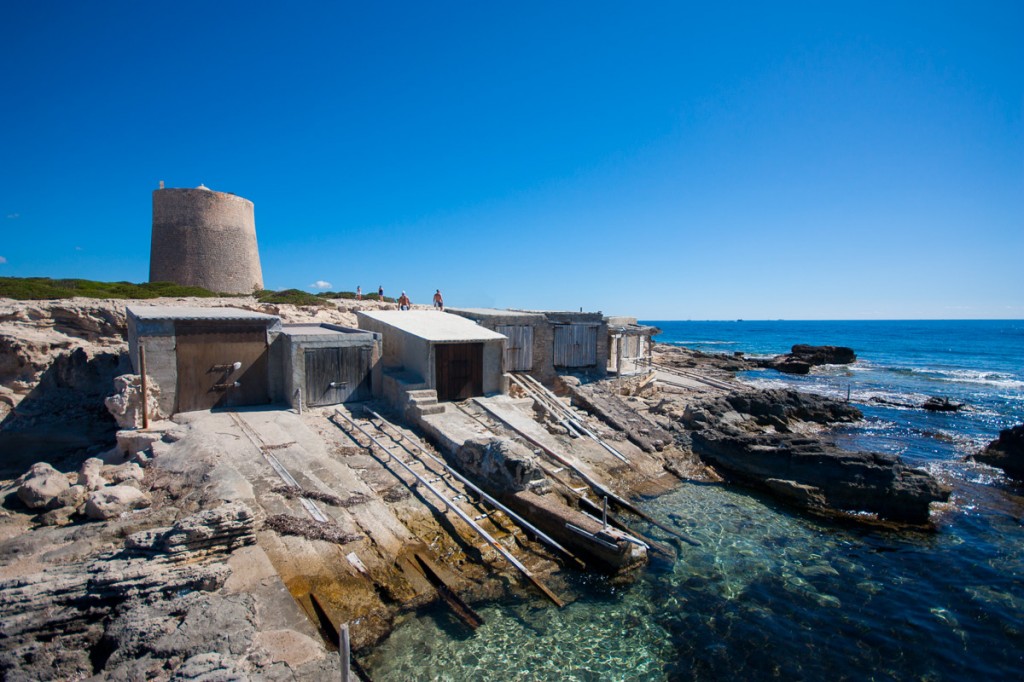 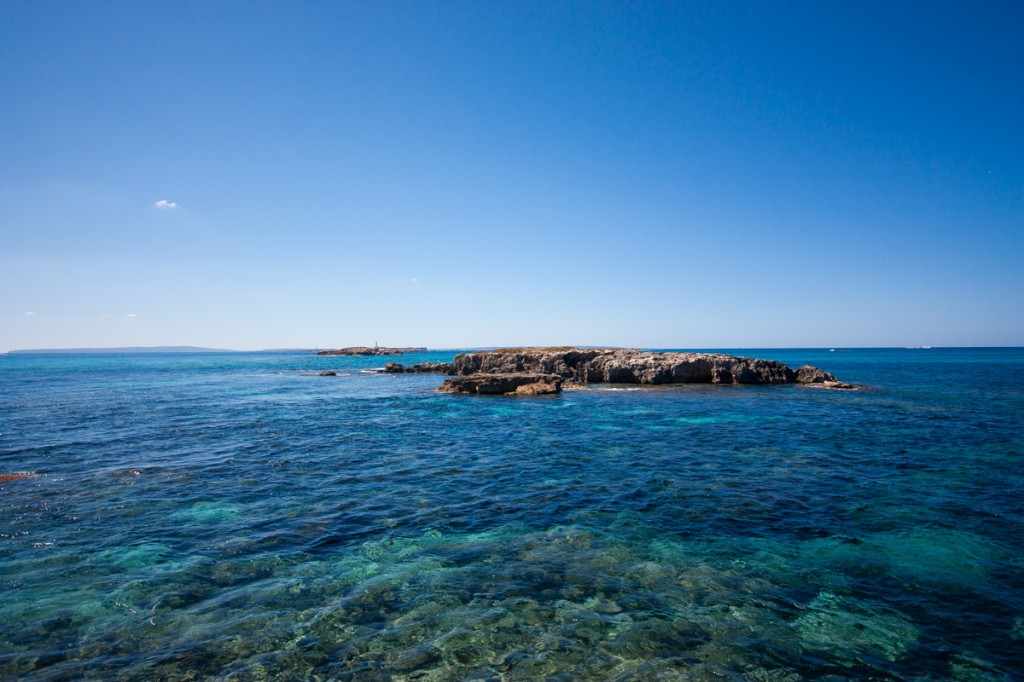 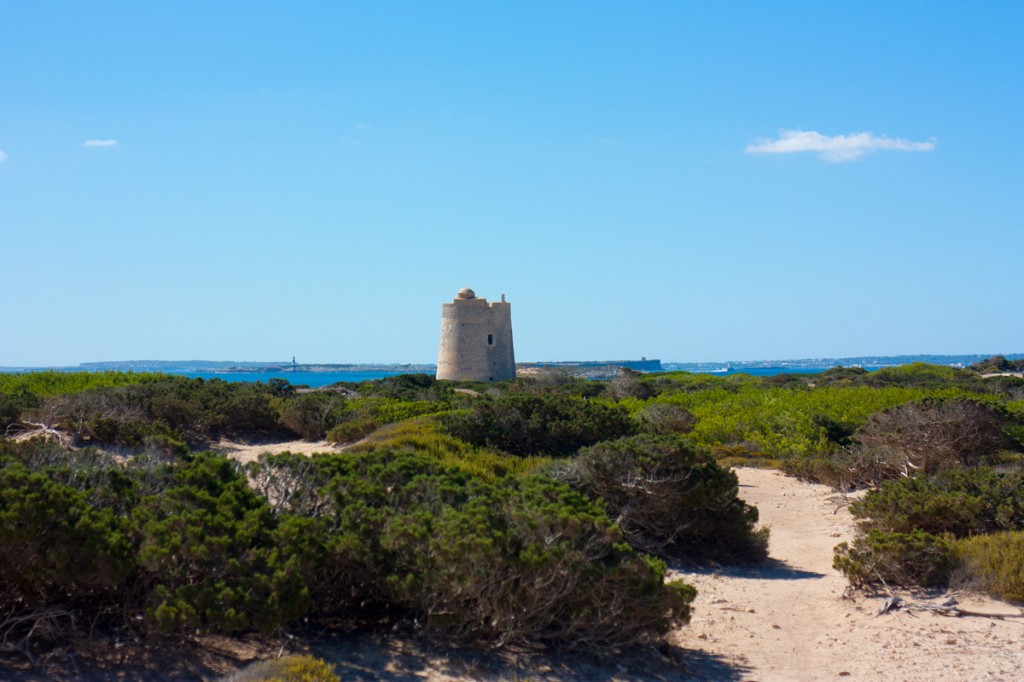 Further south, between the beaches of Ses Salines and es Cavallet is the tower of ses Portes, characterized by having a more slender structure than the rest. It’s purpose was to protect a now disappeared fishing village and today only the huts remain. An idyllic place to visit, with spectacular views to Formentera. This defence tower with two floors and frustum shape dates from the 16th century was built in this place, with enough artillery to protect the island’s fishing activity, along with the tower built on the island of s’Espalmador. Over time it became an important strategic point, maritime passage between Ibiza and Formentera and the entrance of the city of Ibiza was safe from pirate attacks. Today, from this architectural treasure, you can enjoy fantastic views of the coast of Formentera and the sea passage of es Freus, which is the strait which divides both islands. 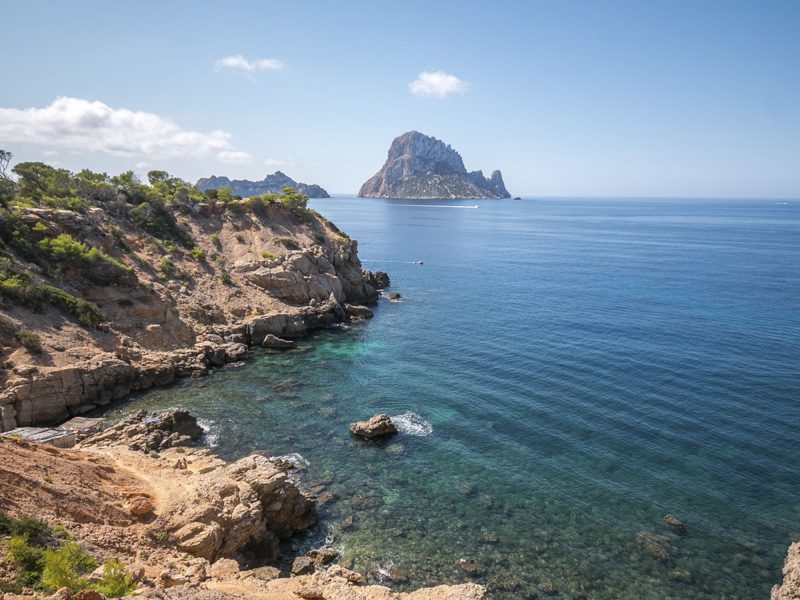 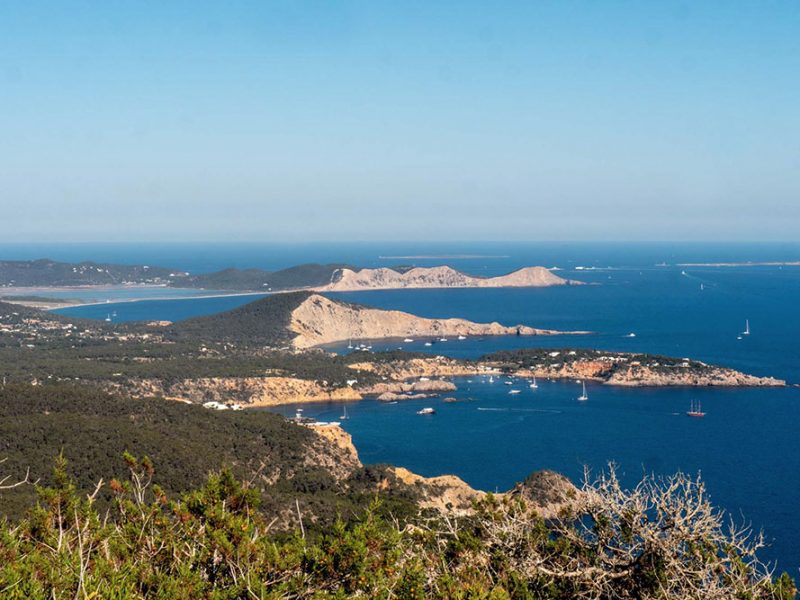