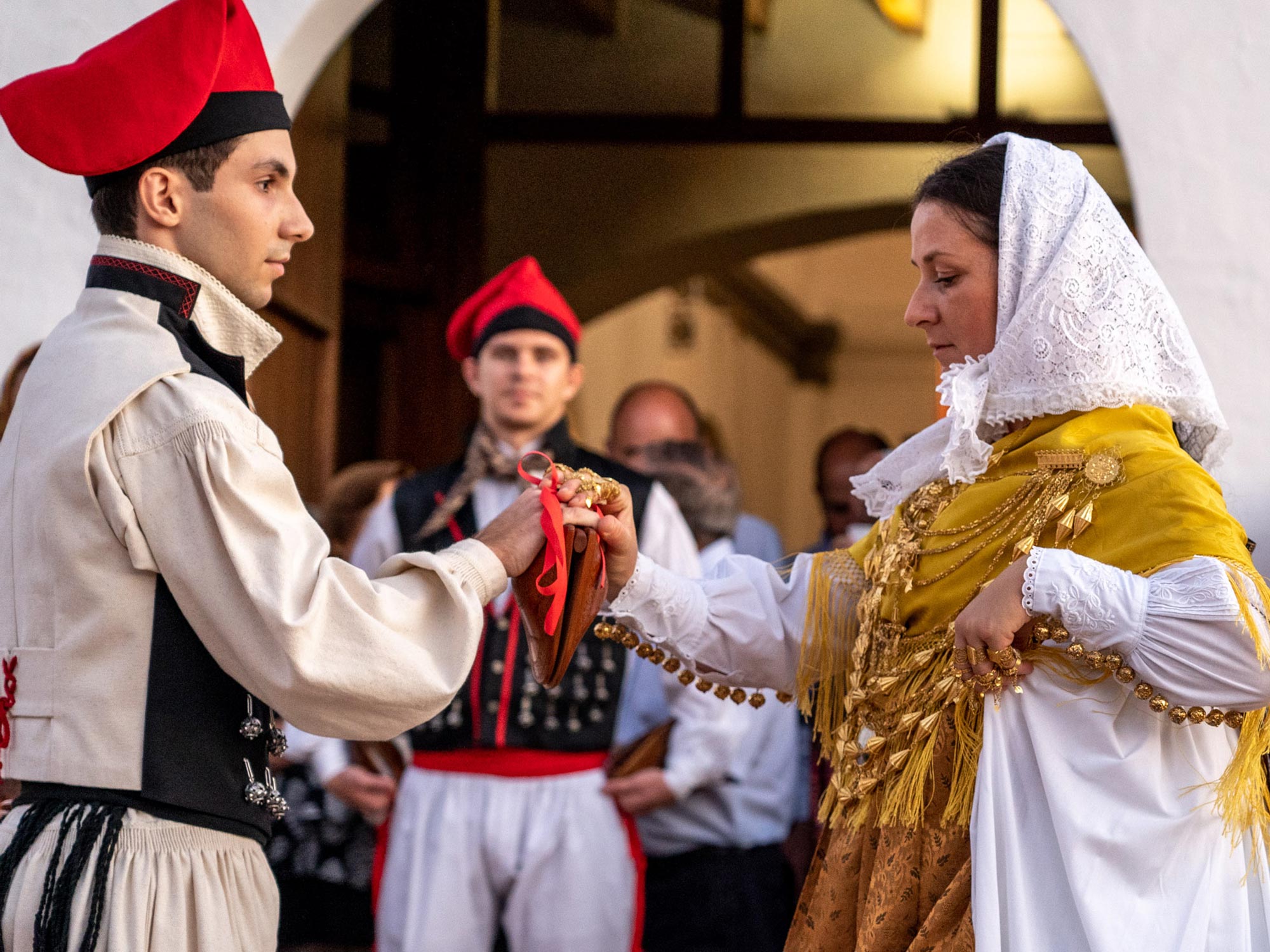 The ball pagès is the typical dance of the Pityusic Islands and is one of the most important cultural assets on the islands. Its colours, rhythm and choreography seem to carry us back to remote times and places, although in fact its origins are completely unknown.

We do know, however, that the extreme differentiation of roles between men and women and the rhythm that accompanies the dance could reflect influences from archaic pagan rites established in the rural environment over the centuries. In the modern era, the ball pagès was celebrated in rural houses on the occasion of the most important celebrations, such as weddings, slaughters, village festivals and festes de pou (well festivals). Today, this intangible heritage is enjoying a period of splendour with numerous activities and exhibitions inside and outside the country, establishing itself as a major cultural and tourist attraction. 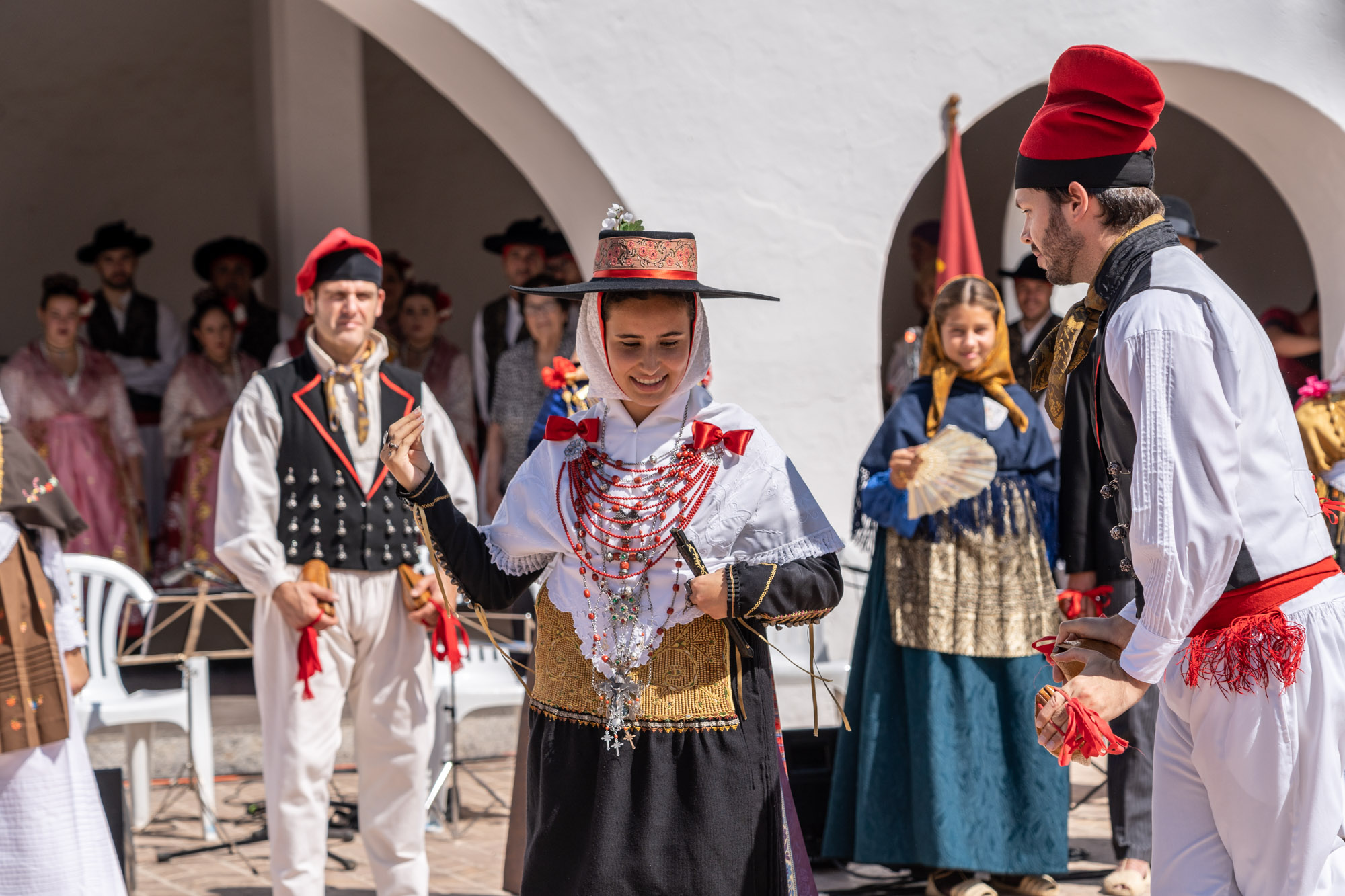 The ball pagès has a unique performance. In the dance, the woman adopts a submissive position and performs circular movements in small, rapid steps, with her eyes on the ground and her arms held close to her body. The man, on the other hand, adopts a much more active and dynamic role, performing great leaps and bounds around the woman, in an acrobatic courtship ritual. The dancers never turn their backs on each other during the dance and the man never looks away from the woman. While he performs his mighty jumps around his partner, the male dancer uses his hands to play the castanyoles, large and beautiful instruments carved from juniper wood, which contribute a marvellous sound to the ritual. 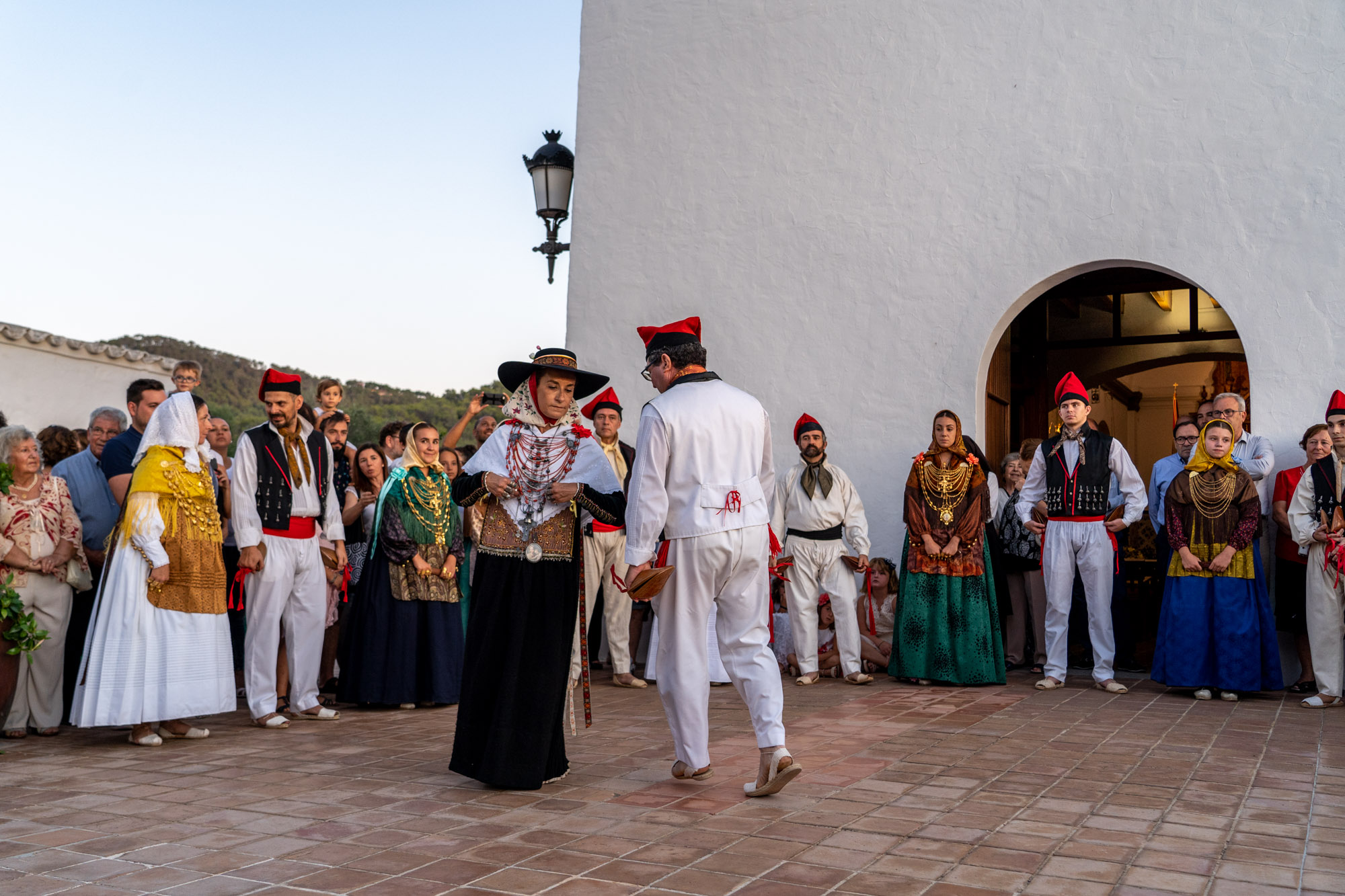 There are two basic types of ball pagès: the curta (short) and the llarga (long). The first one has a slower rhythm and a short duration and would be introduced by the elders, as a prelude to the festival. The second, as its name indicates, is longer and much more vigorous as far as the man is concerned. The latter moves towards and away from the woman as she spins her way around the dance floor. There are variations, such as sa filera, in which the man dances with three women, or the nou rodades (nine turns) or dotze rodades (twelve turns), in which the male dancers do not jump but slide and the choreography varies considerably. Nowadays, new variants of the dance are created by the various folklore groups on the island. 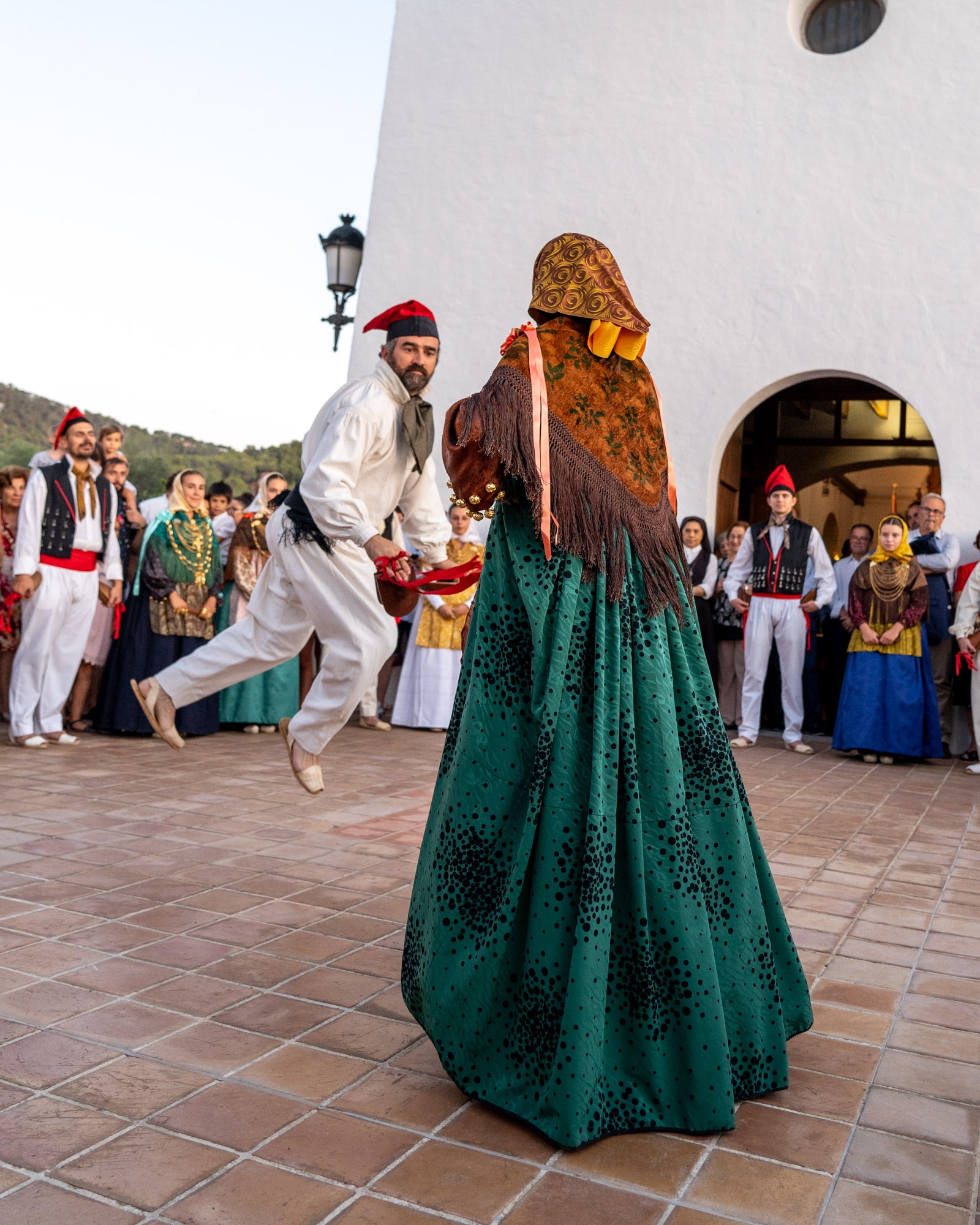 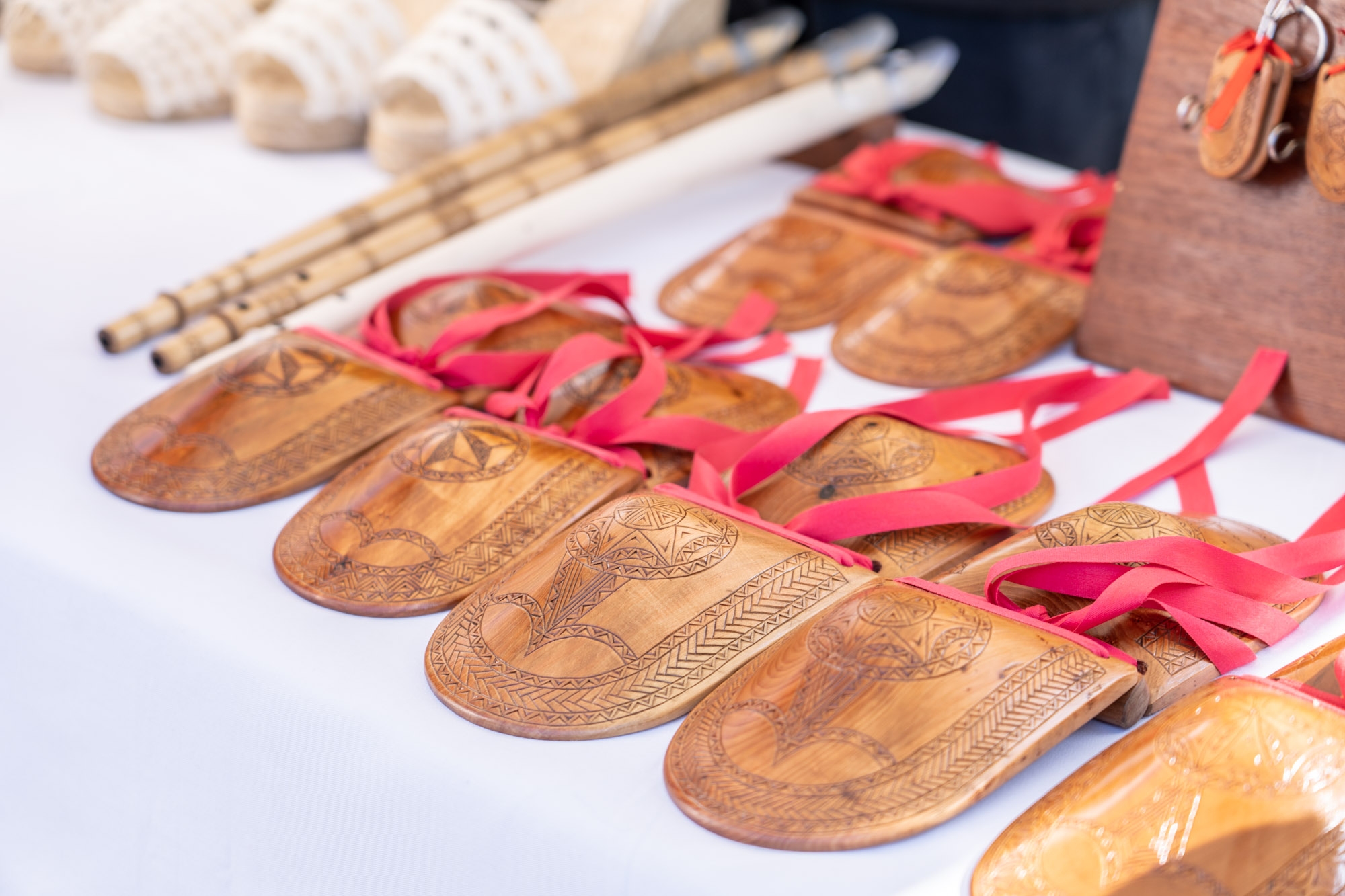 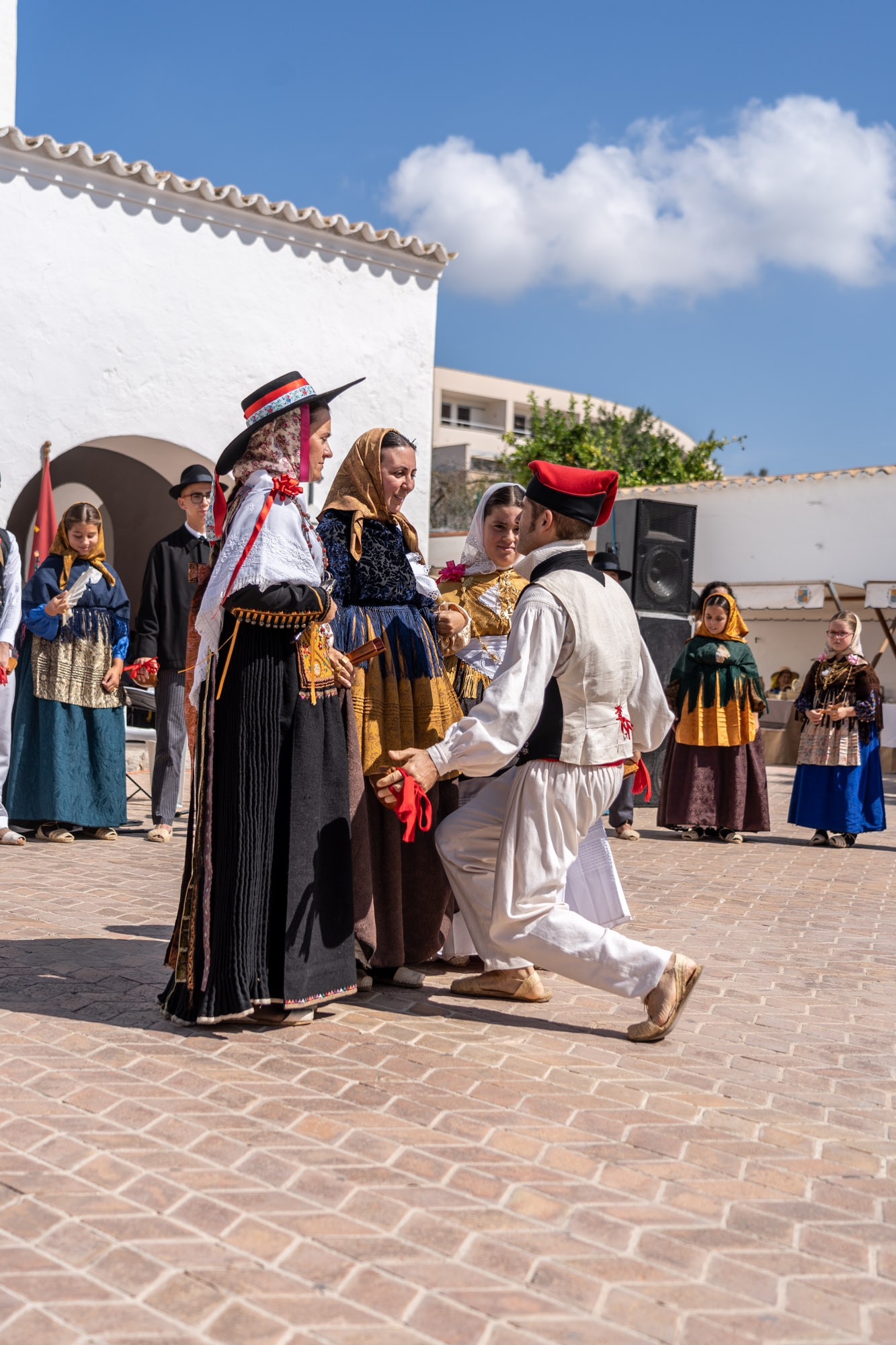 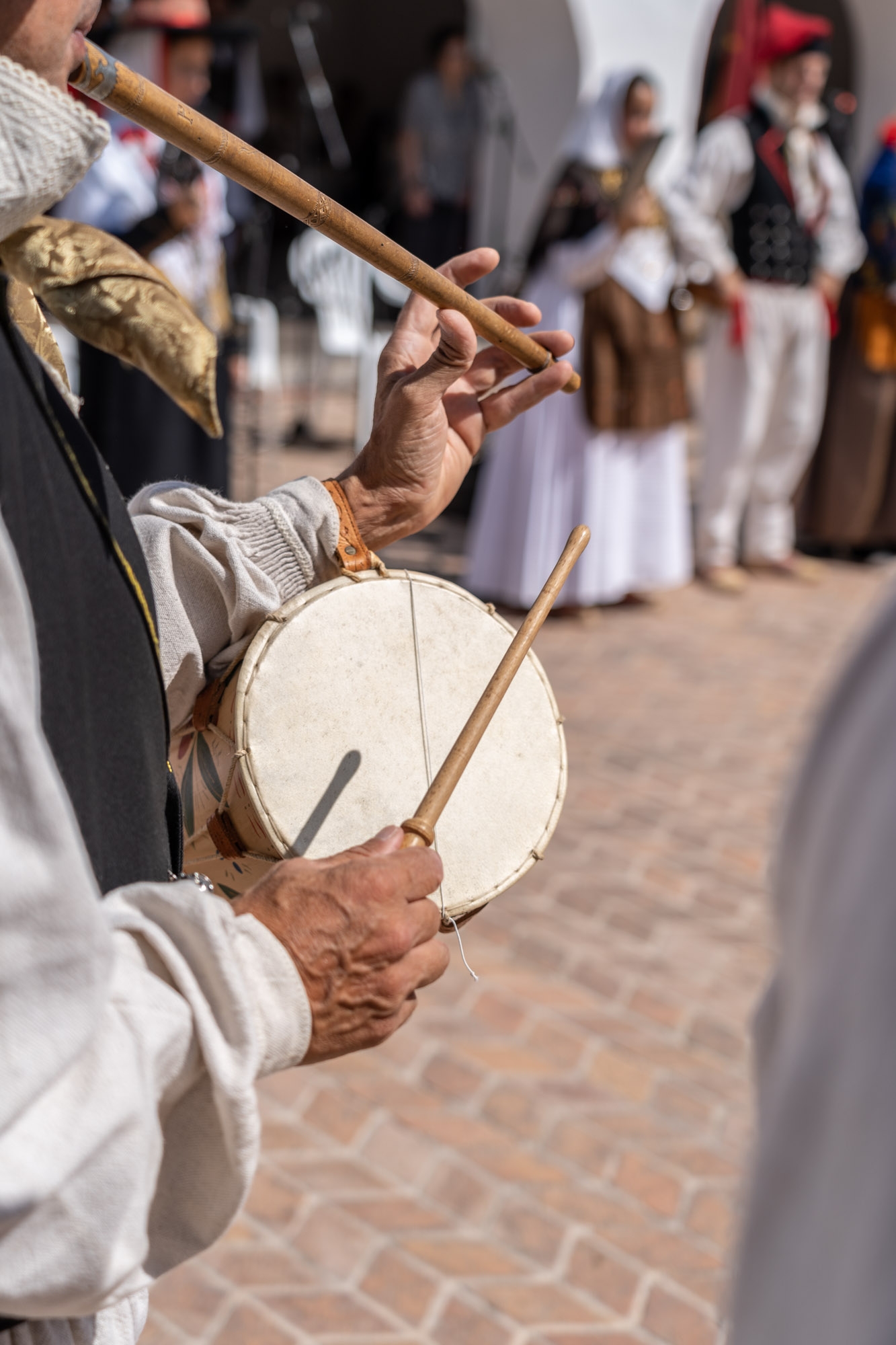 Meanwhile, the music that accompanies the ball pagès, which is characterised by its powerful percussion, is created by the castanets (one with a lower sound than the other), the drum and the flaüta (a wooden flute typical of Ibiza) to which the espasí (a metal sword used as a percussion instrument) is added when the caramelles, the ancestral song heard in Ibiza at Christmas time, are performed.

The ball pagès also serves as a pretext for participants to show off their best clothes. The man usually wears a red sash, white shirt and trousers and a red beret, very similar to the barretina (typical Catalan beret). This is also usually accompanied by a black waistcoat and a yellow scarf. The woman’s dress, on the other hand, is quite spectacular and is made up of wide, multi-layered skirts and lace. It is accompanied by a doublet and a lace scarf on the head. And, most importantly, the complement par excellence: the emprendada, a unique set of jewels that the woman exhibited as a sign of social status. Gold, silver, mother-of-pearl and red coral are combined in delicately shaped articles created by master craftsmen. 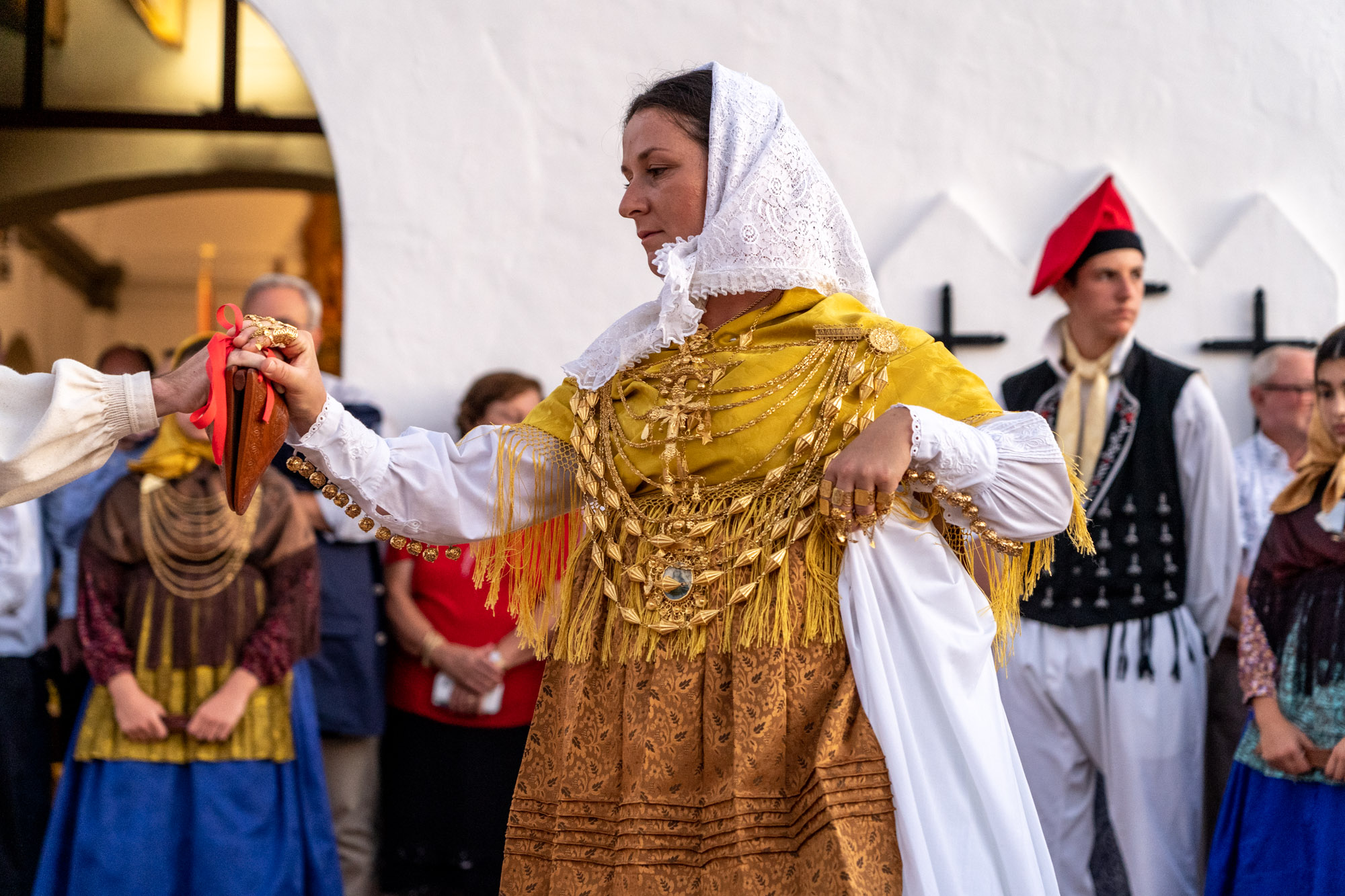 Nowadays, the ball pagès is enjoying a golden age thanks to the passion and dedication that the new generations of balladors (dancers) and sonadors (musicians) have put into the diffusion of this rich cultural heritage. The municipality of Sant Josep is privileged to boast three colles (groups) that promote and disseminate it through numerous events inside and outside our borders: the colla del Grup Folklòric Sant Josep de sa Talaia, the colla de Sant Jordi and the colla des Vedrà.

El Grup Folklòric Sant Josep de sa Talaia began its work in 1980 and has focused on reviving the traditional festivals and passing on the customs inherited from the elders to the youngest members of the community. It has participated in various national and international festivals (France, Sweden, Belgium, England, Portugal).

La colla de Sant Jordi (Grup Folklòric Sant Jordi de ses Salines) swas created in 1982 with the aim of investigating, reviving, teaching, disseminating and promoting the customs and folklore of Ibiza. It has about 60 members, including balladors (dancers) and sonadors (musicians). It organises courses for the making of typical clothes and instruments, as well as talks and classes to disseminate the customs and traditions of the island. It has participated in various national and international festivals (Germany, Cyprus, Portugal, France, Switzerland, Austria).

La Colla des Vedrà, meanwhile, was established in Sant Agustí in 1981 to preserve the cultural heritage transmitted by previous generations and to promote its dissemination among young people and the general public. Since its creation, the group has used dance, music, costumes and instruments as a basis for the dissemination of Ibizan culture and tradition, organising a very intense annual agenda of courses, meetings, competitions, events and festivals.