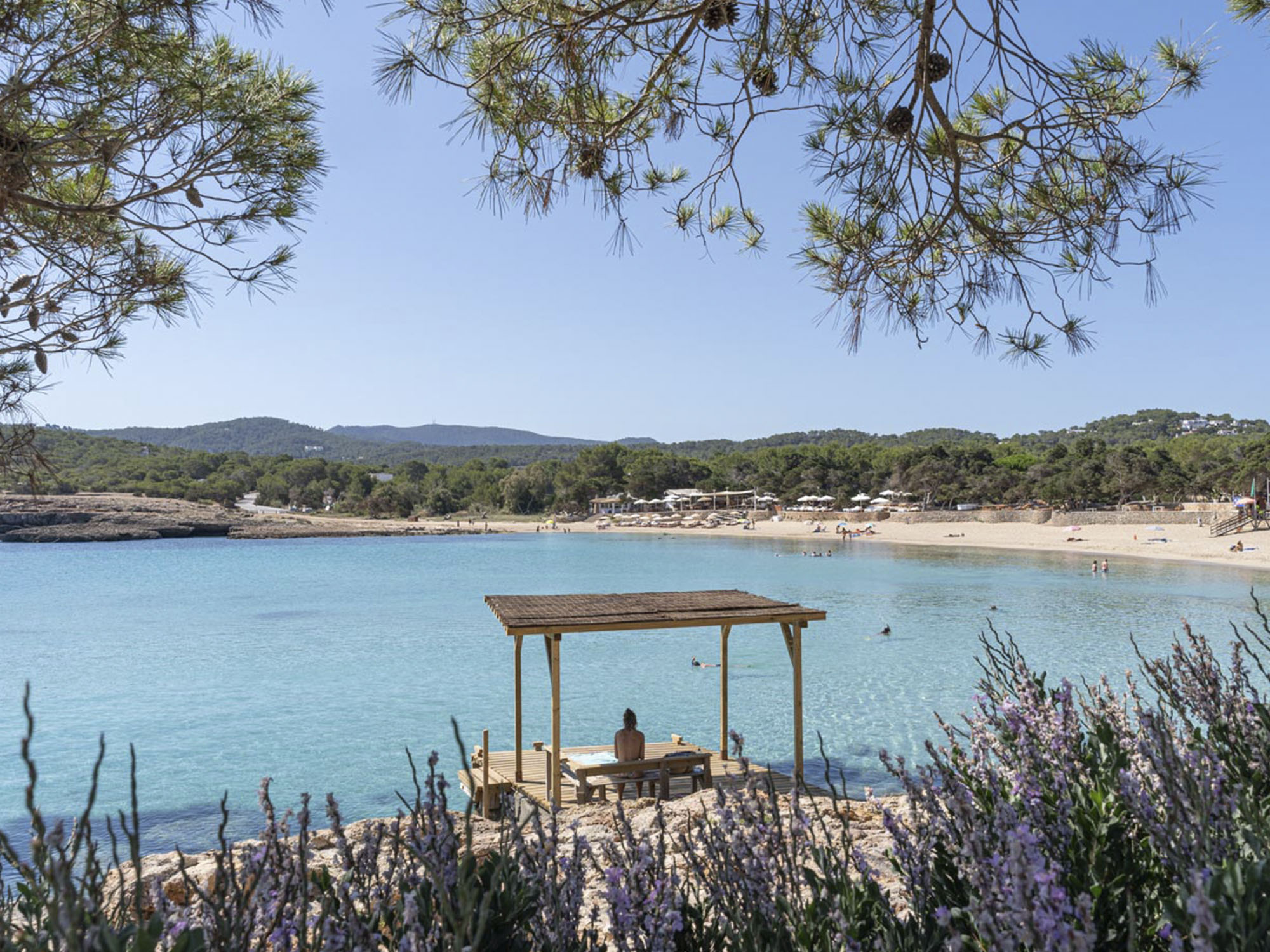 This walk follows the coastline to the south of Sant Antoni Bay, beginning and ending at two popular and yet very different beaches.

You will see an old sandstone quarry, observe the interesting geological features of this stretch of coast, admire typical boathouses, be amazed by an incredible cave and, finally, dive into the paradisiacal turquoise waters of Cala Bassa. The walk runs along small coastal paths, with hardly any signs but very clear. It is an easy walk and has an approximate length of 7 kilometers, there and back. 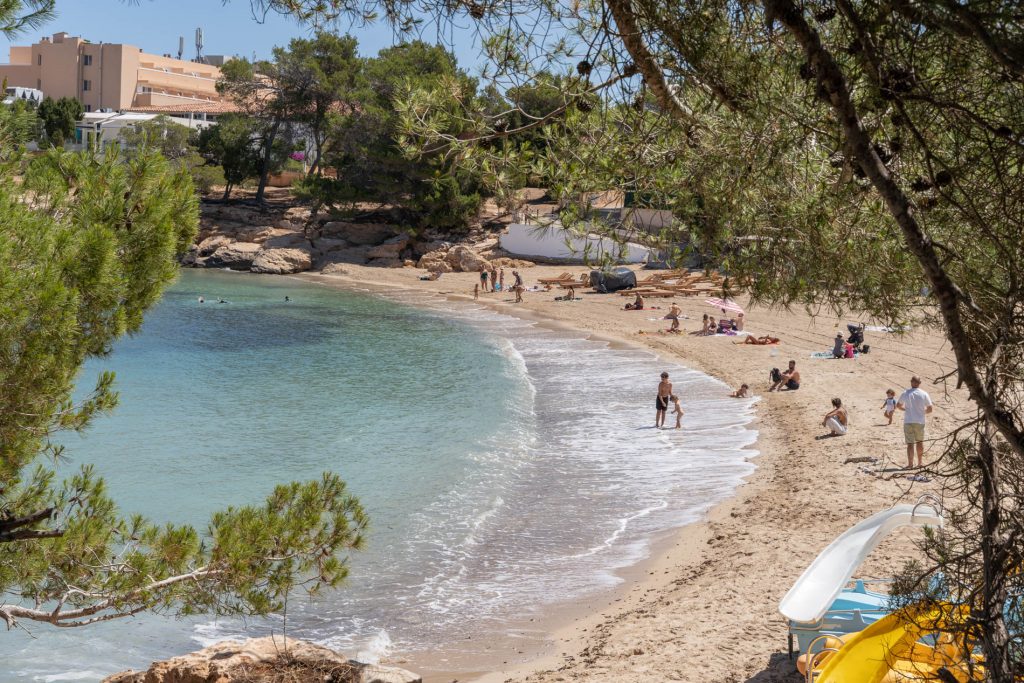 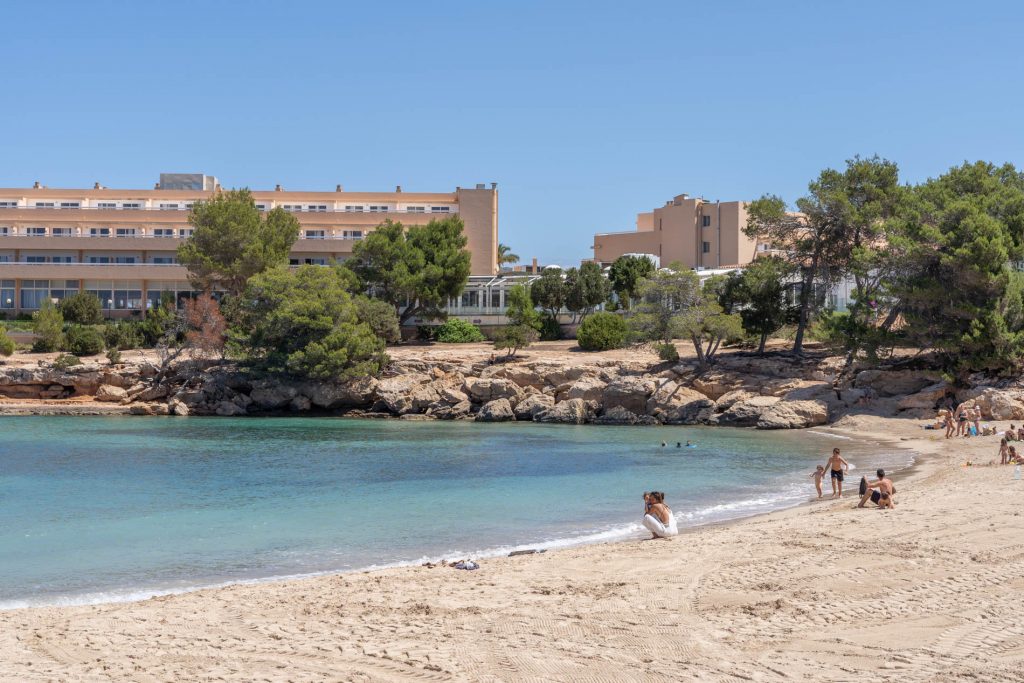 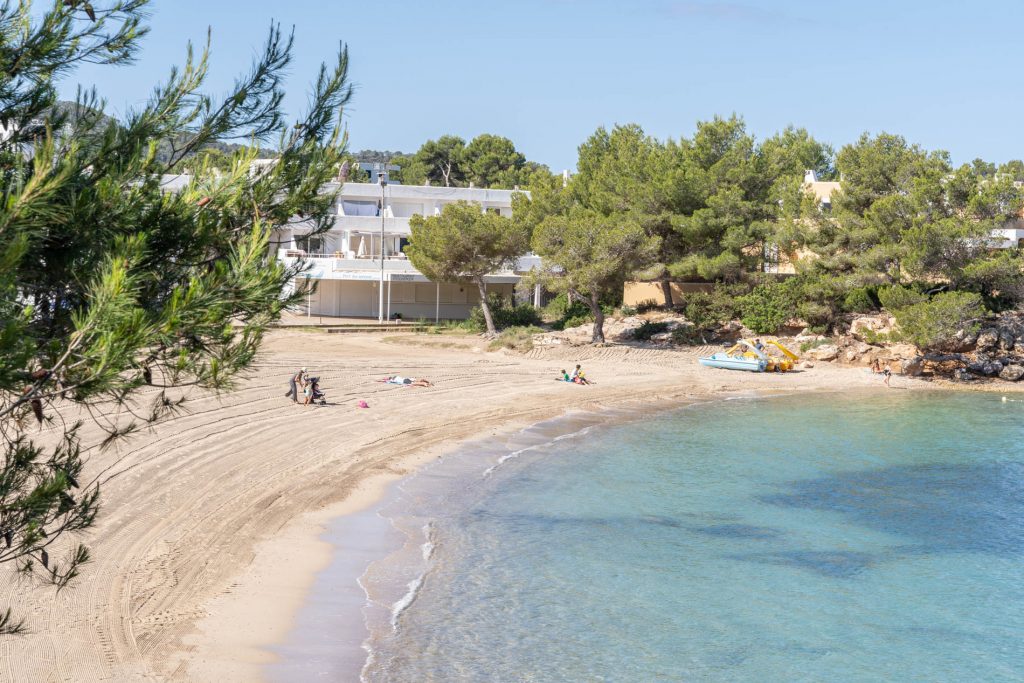 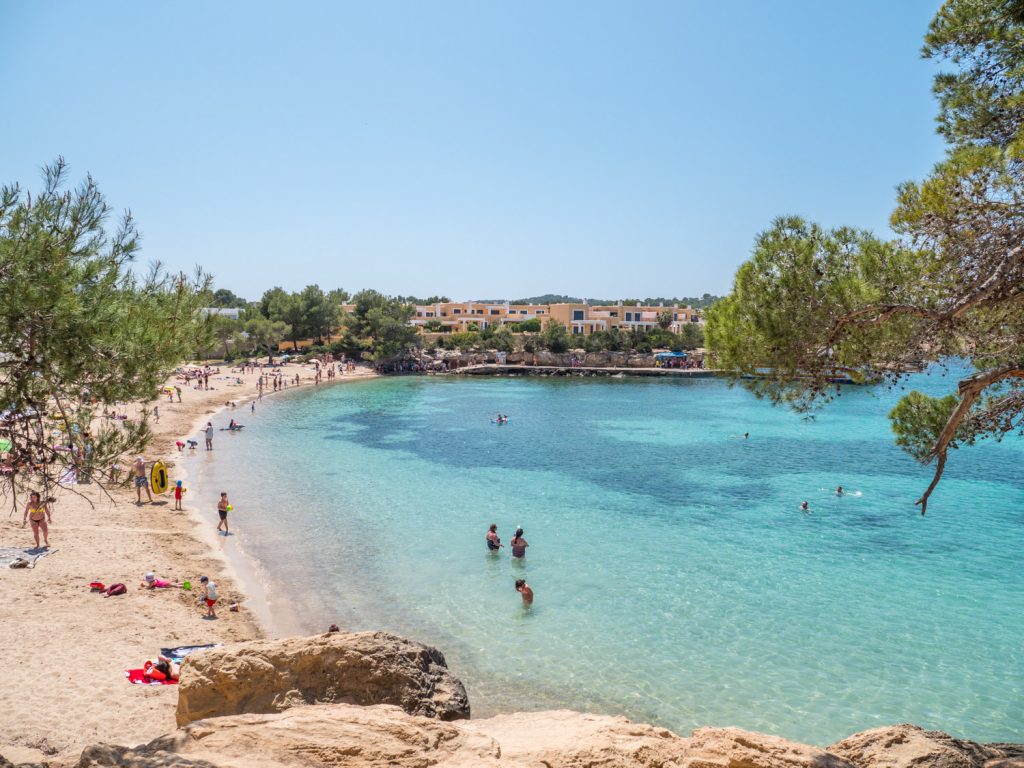 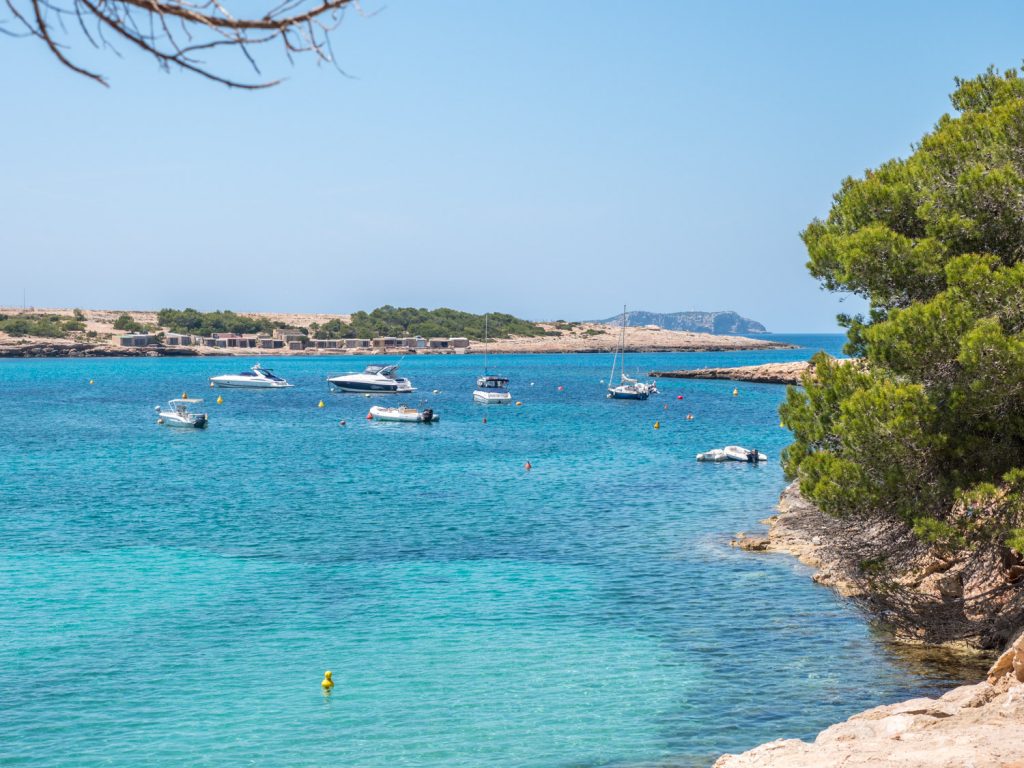 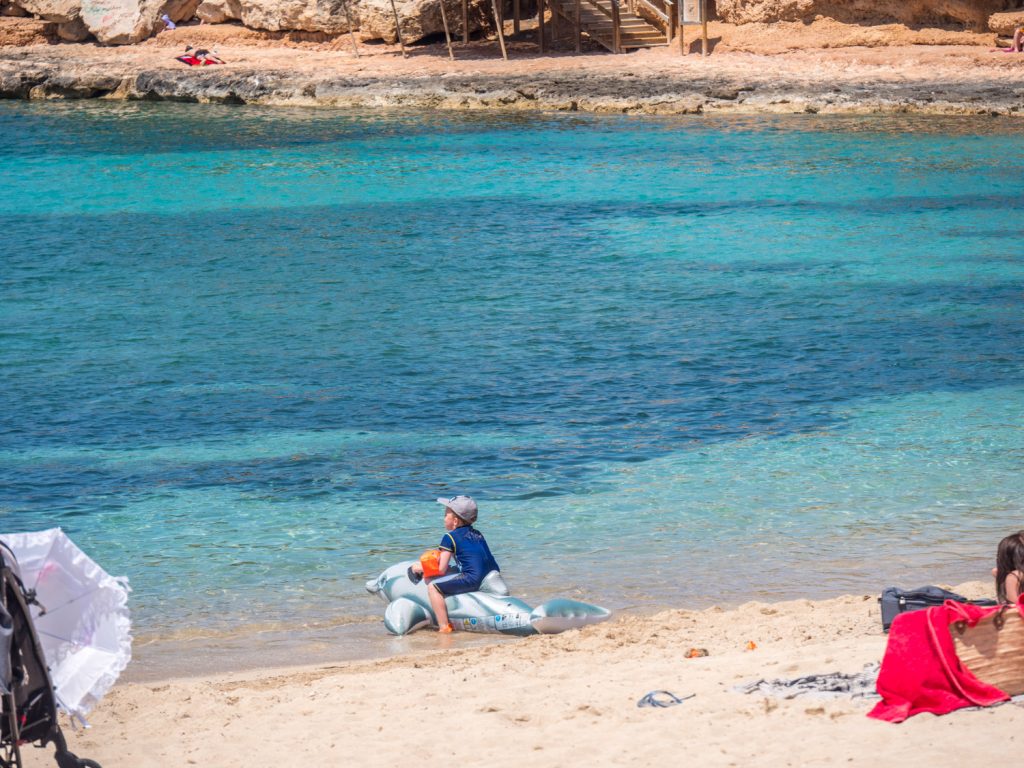 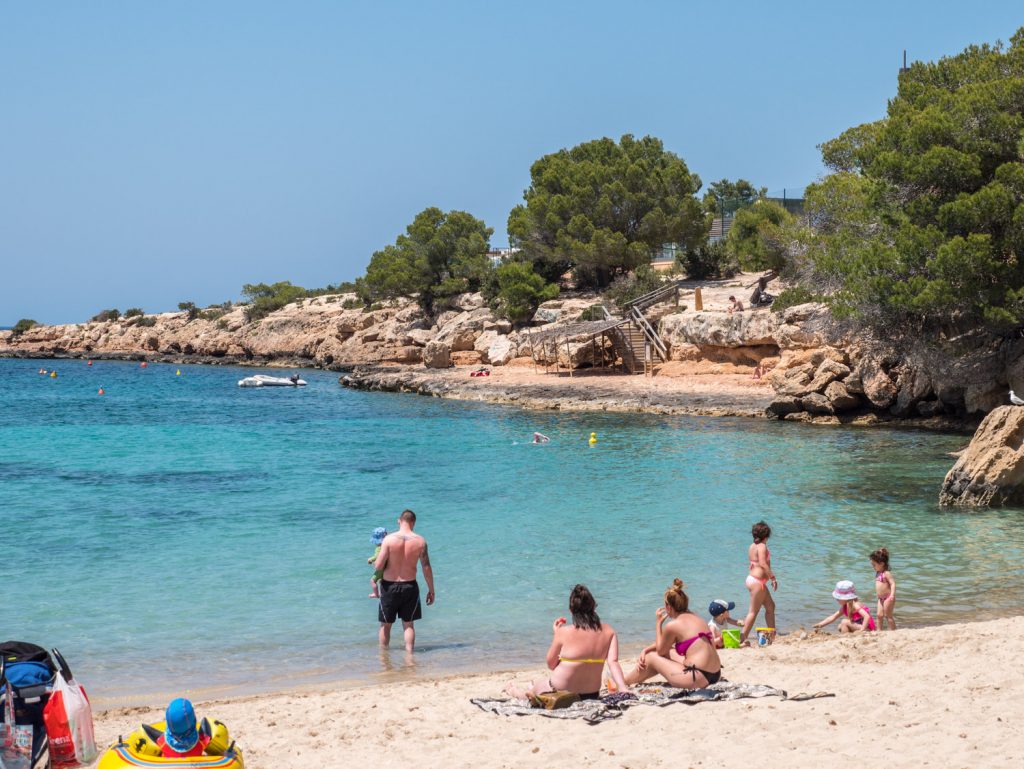 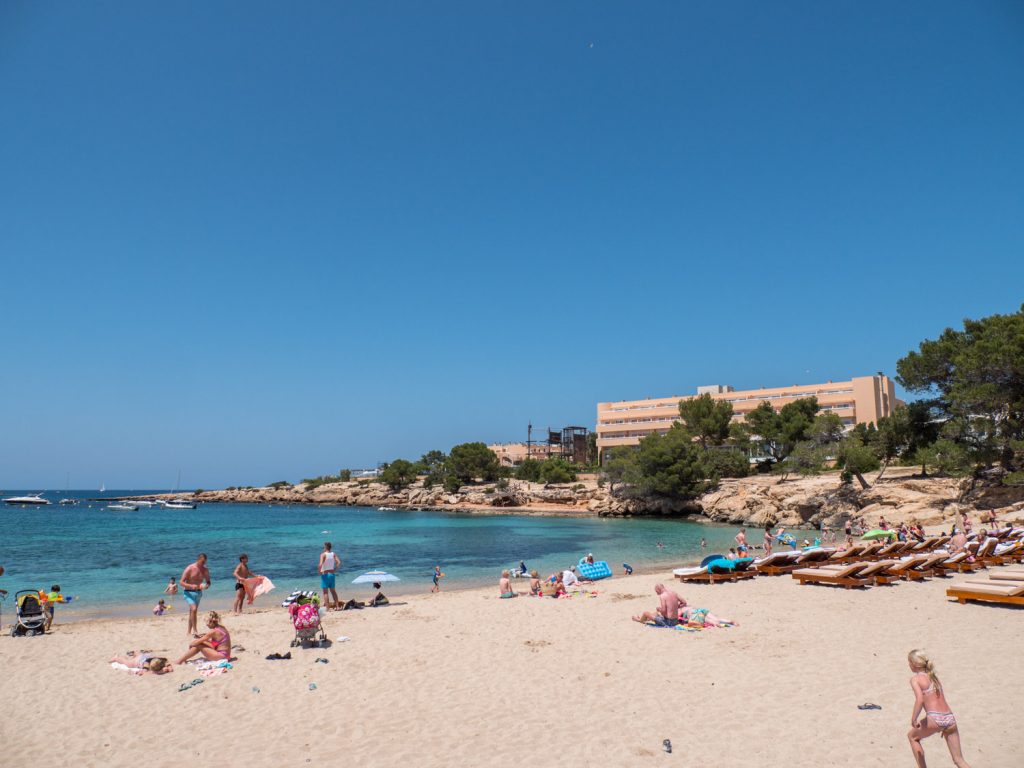 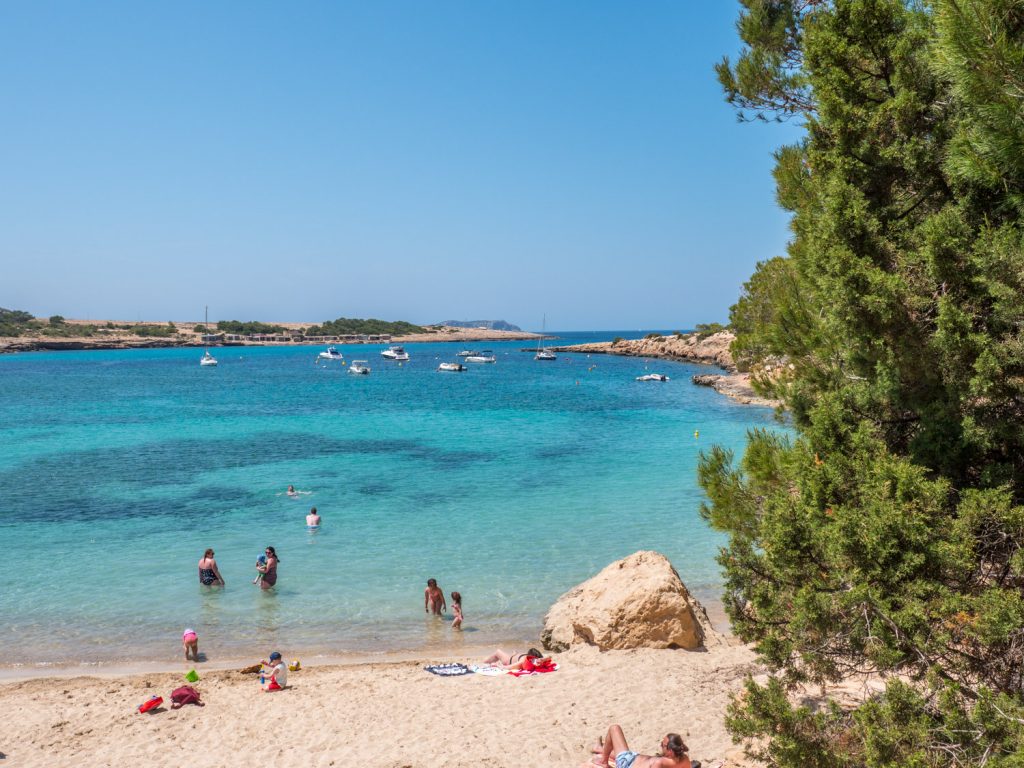 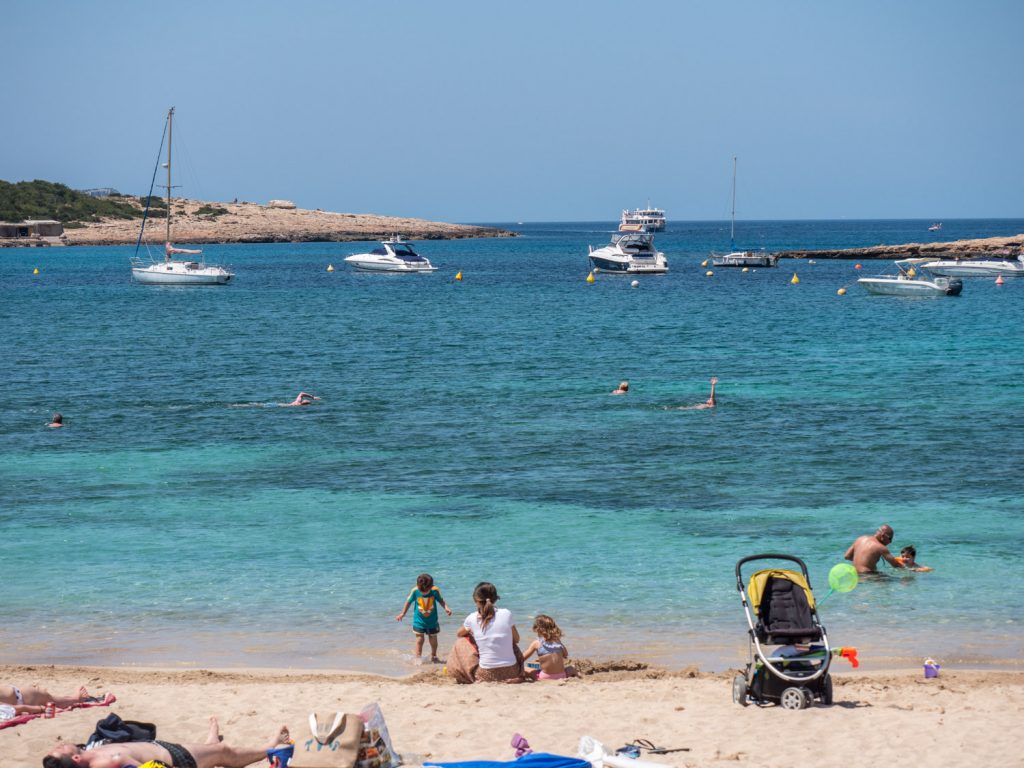 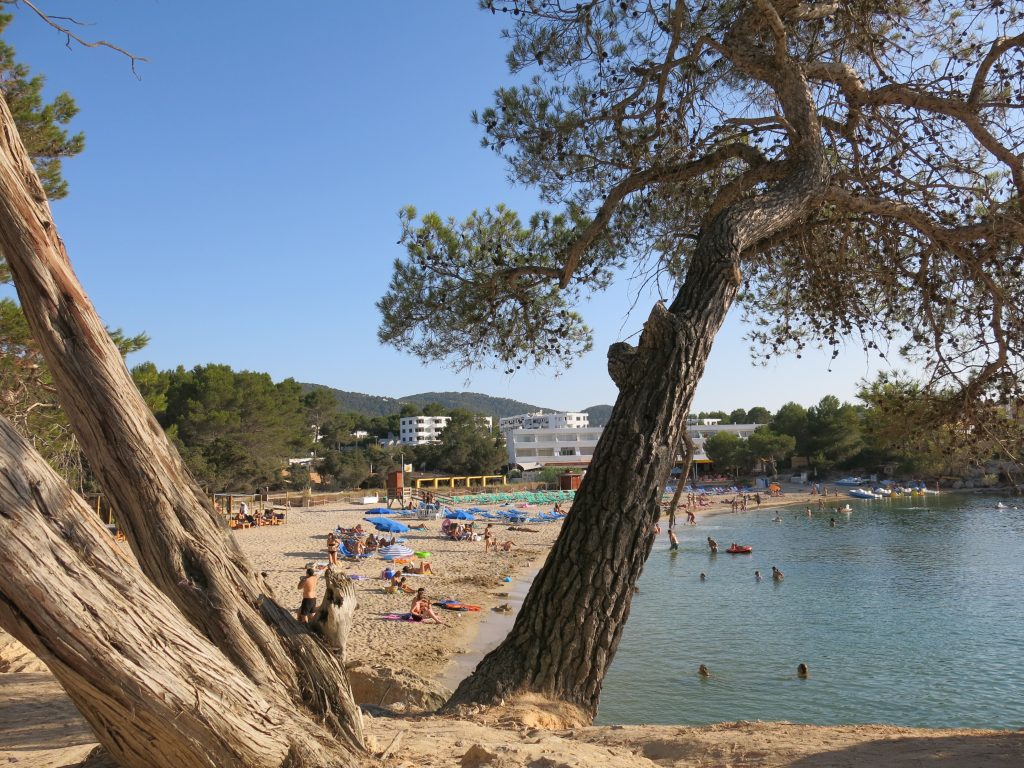 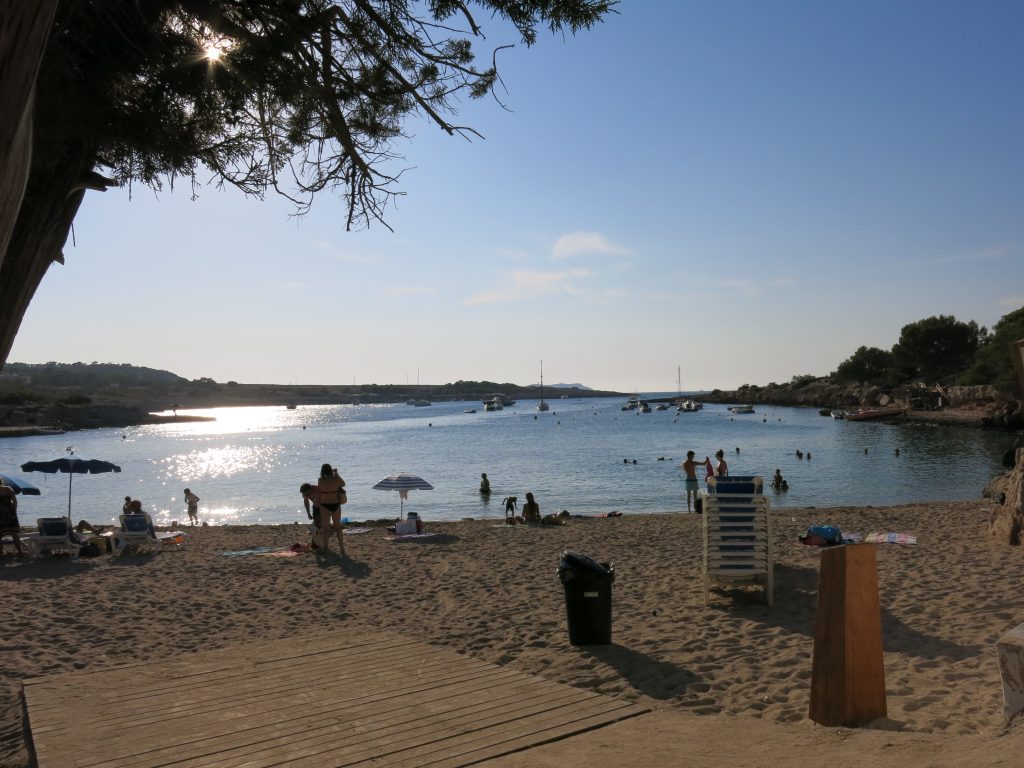 The walk starts on the Port des Torrent beach, a very popular beach that offers the bather crystal-clear waters, a wide sandy area and a whole range of services within easy reach. From the left-hand side, we will follow the small path that runs along the coast, parallel to the various buildings that are also on the left. We will walk through areas of pine and juniper trees, with the sea to our right. After about 40 metres, we come to a wider path that leads to an area of boathouses. These are located in the shelter of Punta Pedrera, facing into the natural cove of Port des Torrent. Punta Pedrera (Stone Point), as its name suggests, was an old quarry from which sandstone was extracted. This sedimentary rock, the result of dune lithification, is made up of sand grains and fossil remains bound together by a carbonate cement. Sculpted by the wind, sandstone has been an essential material in such major constructions as the walls of Ibiza. As you approach, you will see numerous vertical and horizontal geometrical cuts in the coastline, including large steps and benches, some of which provide easy access to the sea. Here, you can take a dip in a natural swimming pool formed by the quarry’s pits.

The trail continues, hugging the coastline. In some sections, it is necessary to use your intuition, always using the sea as a reference point; the aim being to keep as close to the coast as possible. The trail passes the end of the occasional tarmacked road and the odd path leading to the edge of the cliff. At that moment, you will be walking over a geological formation consisting of a carbonated surface over a layer of compacted sand from the Quaternary, whose base, consisting of several conglomerates at sea level, was also formed in the Quaternary. These different substrates are clearly visible on the Racó des Penyal cliff, the next rocky outcrop you will reach one kilometre after leaving Sa Pedrera. This small peninsula has a very pronounced, arrow-shaped inlet. It is not possible to skirt it along the coast, so it is necessary to make use of one of the open paths through the forest in the area in order to continue the walk.

You are now very close to Cala Bassa. Once you have passed the end of this inlet, you will see several paths that continue along the coastline. These must be followed with your eyes always to the front in order to make out the coast that precedes our destination. After passing a few houses, the coastline becomes clearer and you will find yourself on a rocky base close to sea level. Here, you will see several caves that open up to the sea and are ideal for kayakers to explore. However, a few yards ahead, with Cala Bassa in front of you, you will find a beach-cave open to the sky, undoubtedly one of the major attractions of the area. You can go down to the water and paddle if you want to. You are now just a stone’s throw from Cala Bassa, a beach whose access contains some peculiar rocky formations that give way to an area of dazzling white sand and crystal-clear water. There are plenty of places to eat, with several restaurants and beach bars specialising in a wide range of dishes. It has a cosmopolitan atmosphere and access by sea with regular boat trips from Sant Antoni. 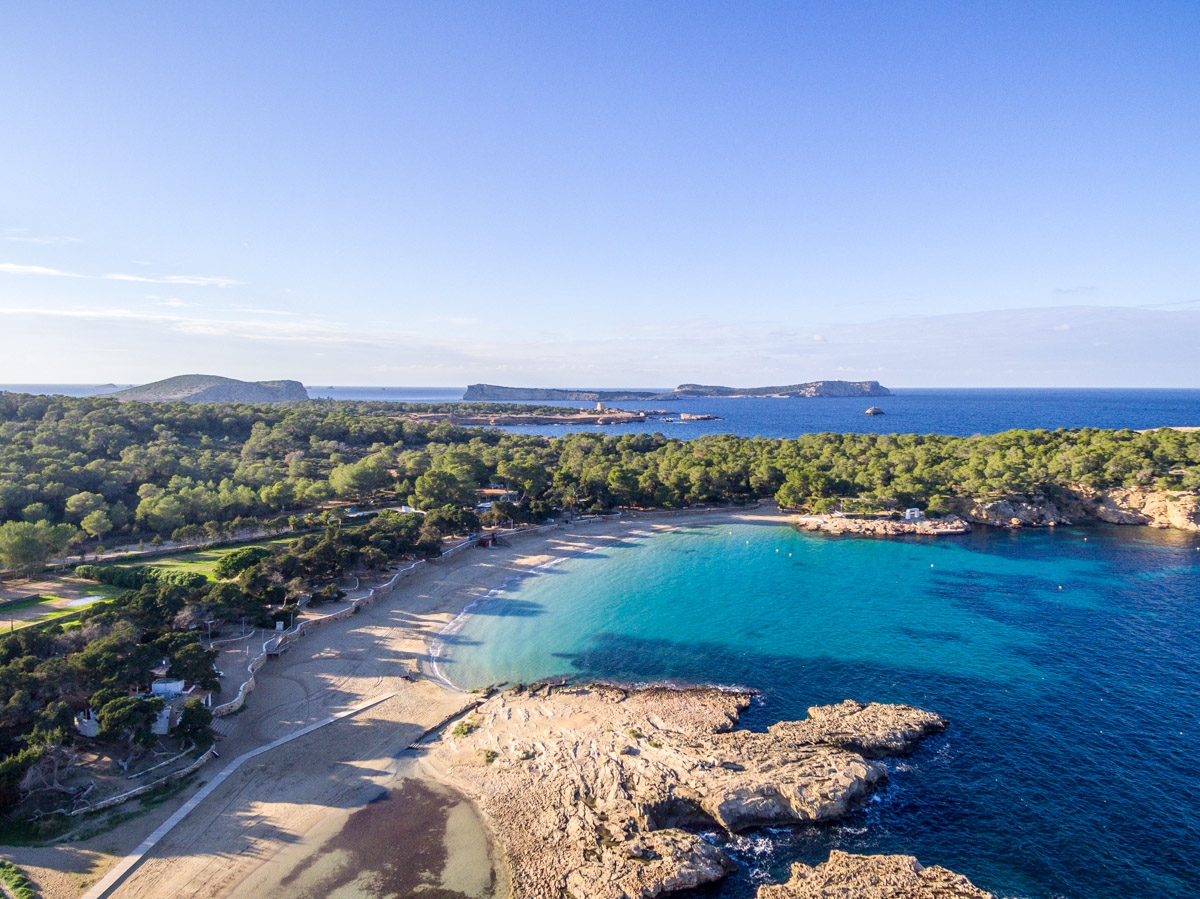 Once you have rested in the shade of its spectacular juniper forest, you can return to the starting point by following the old Cala Bassa path. This starts on the road that leads to the beach and follows an inland route back to Port des Torrent. You can admire the richness of the local flora until you reach the tarmacked section that marks the beginning of Avenida Sant Agustí in the urban area that is a short distance from Port des Torrent.