Hit enter to search or ESC to close
Pueblos @en ‘Sa matança’ is the popular name by which the traditional pig slaughter for food purpose is known for in Ibiza. Since the domestic economy characterized by the Ibizan countryside is based on a mixture of dry land crop and kitchen garden and with fattening of poultry, sheep… But the animal, par excellence, which is mostly profitable food wise, and which with Ibiza’s specific conditions it is easier to raise, is the pig.

Every year when winter arrives, many Ibizan families still celebrate the tradition of ‘sa matança’ (the pig slaughter). It is a festive gathering which initially was meant to supply meat for the whole year to the families but that over the years it has been maintained as a tradition.

In this particular party, the whole family, neighbors and friends are invited, all knowing they have to work and collaborate as there are many tasks that are covered in a day of ‘matanzas’. In return, everyone was invited to a special dinner that same day and were given some sausage made from the pig. At the same time the hosts made sure that this day nothing was missing and that there was more than enough food for everyone as well as all the necessary tools for the slaughter: workbenches, sharpened knives, washtub, meat grinder, pots, twine to tie, spices to flavor the sausage…

For a successful pig slaughter day, throughout the year the pig has been fed and fattened properly. If it’s a male pig, it should be sterilized before slaughter to not affect the flavor of the meat. While if it’s a female pig it must avoid being slaughtered next to zeal, because that would also affect the quality of the meat. The chosen time of the year is usually before Christmas or after Lent.

The pig slaughter begins very early. The men led by the ‘matancer’ (expert in the art of killing and butchering the animal) are in charge of slaughtering the pig, bleeding it as much as possible, since the meat for making “sobrasadas” (the typical spicy sausages) should not contain any blood. This blood, instead, will be saved for making “butifarras” and “botifarrons” (black pudding), and must be removed to prevent it from curdling. Then the pig is ready for buchting. 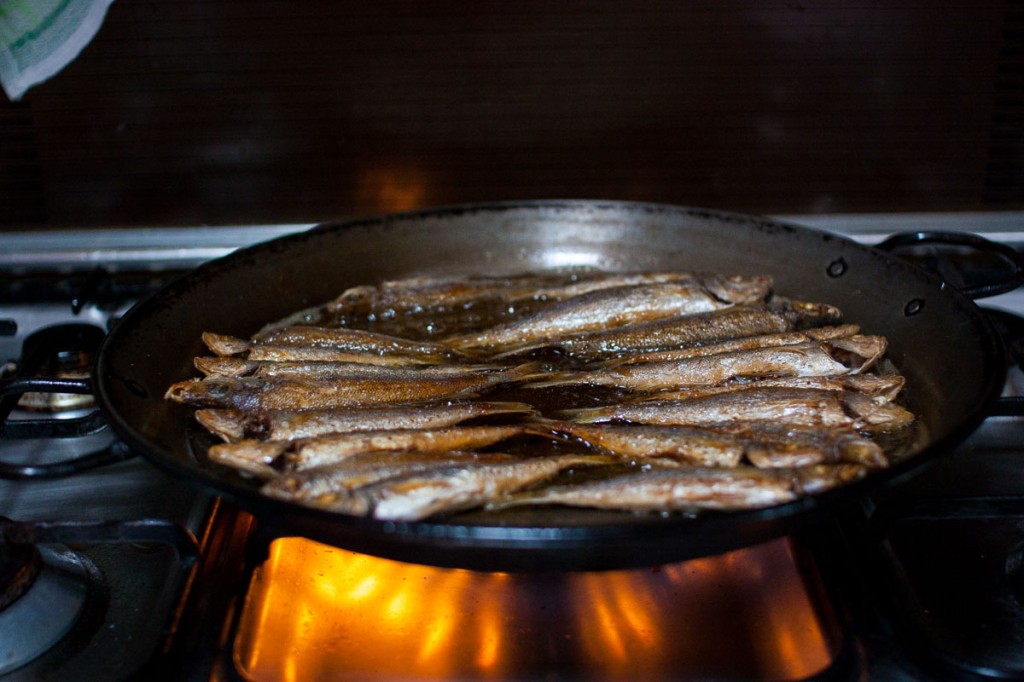 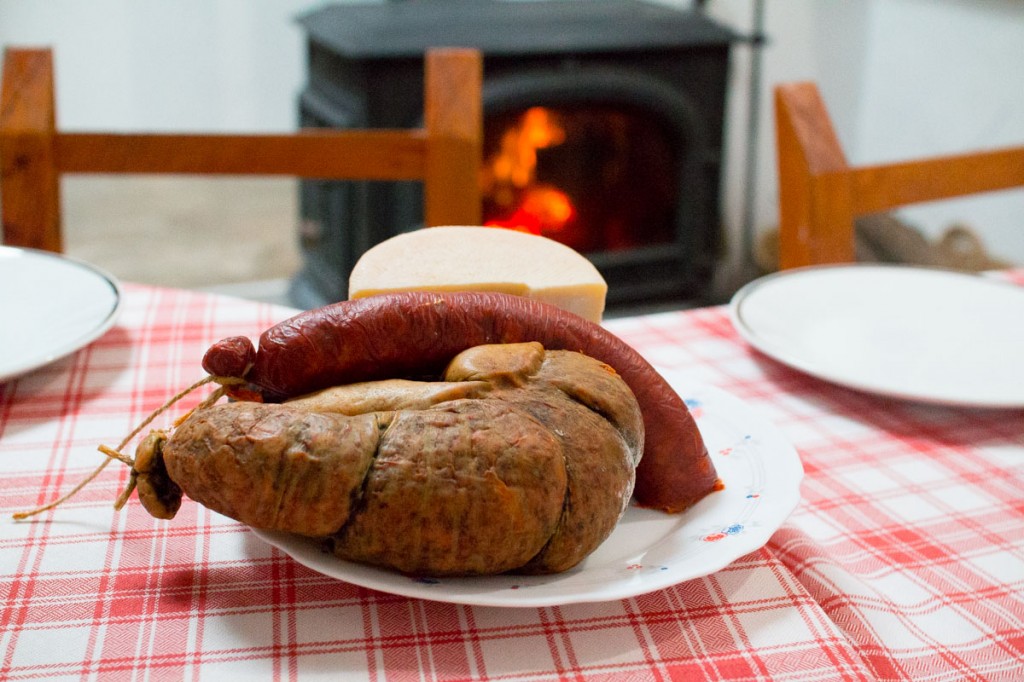 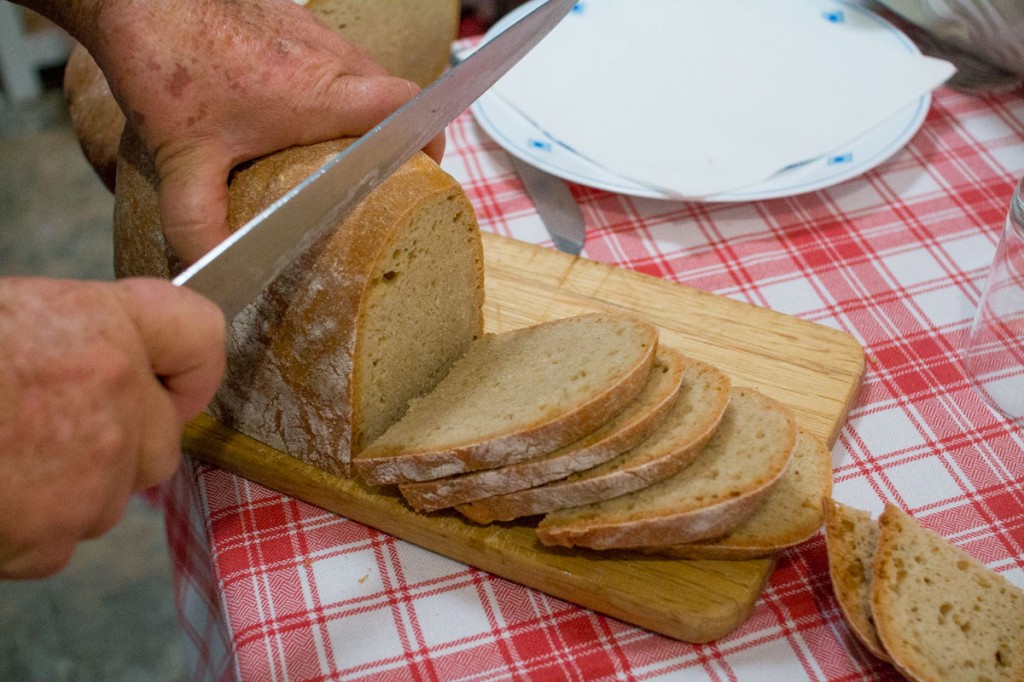 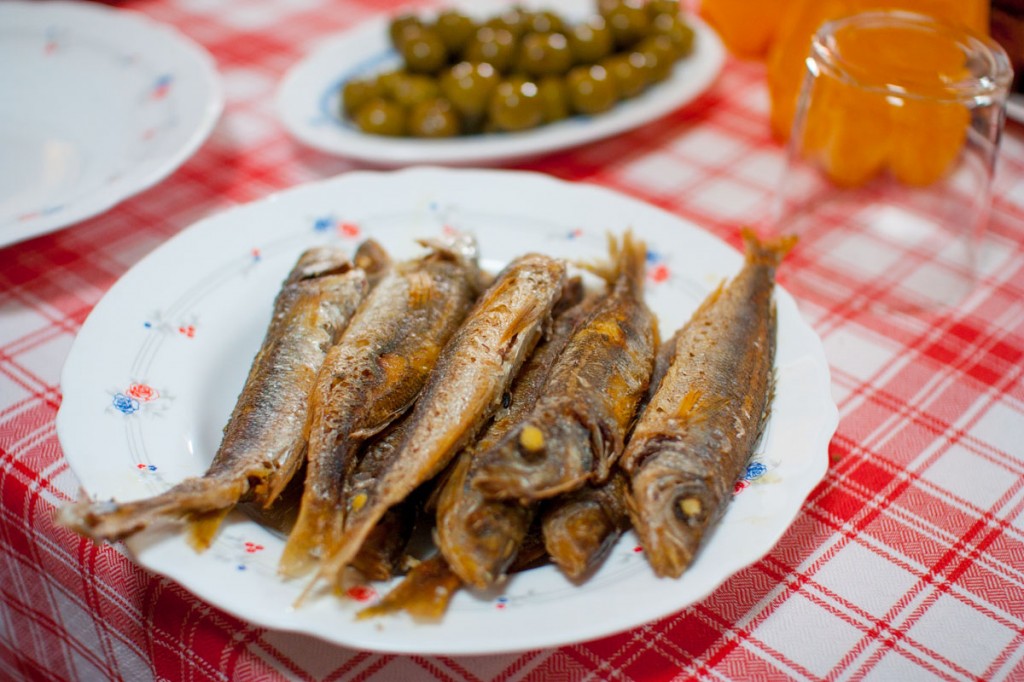 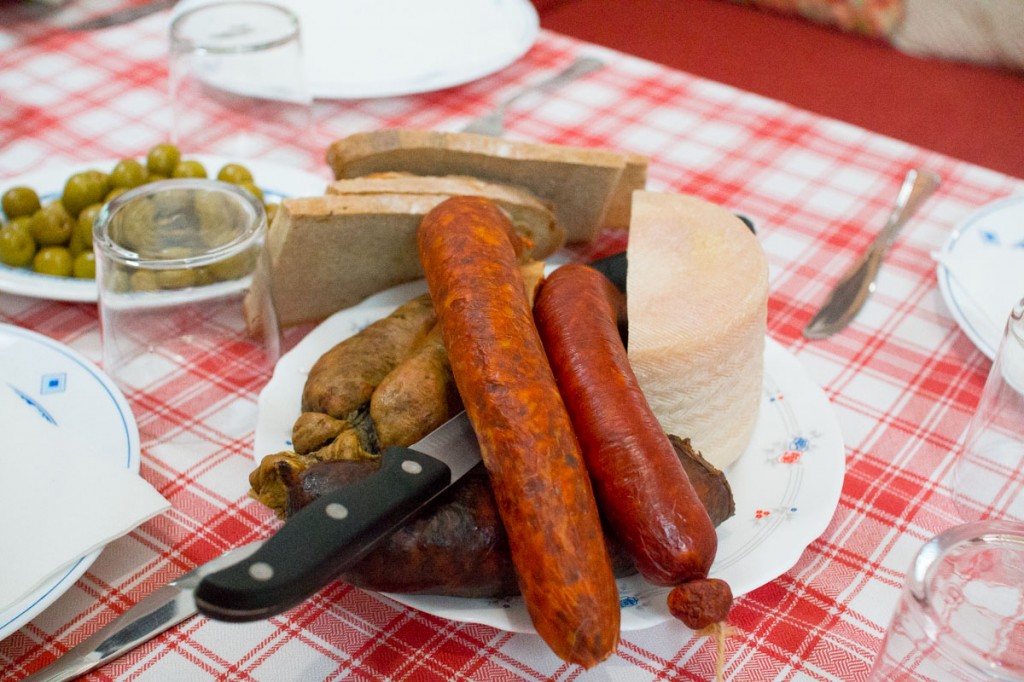 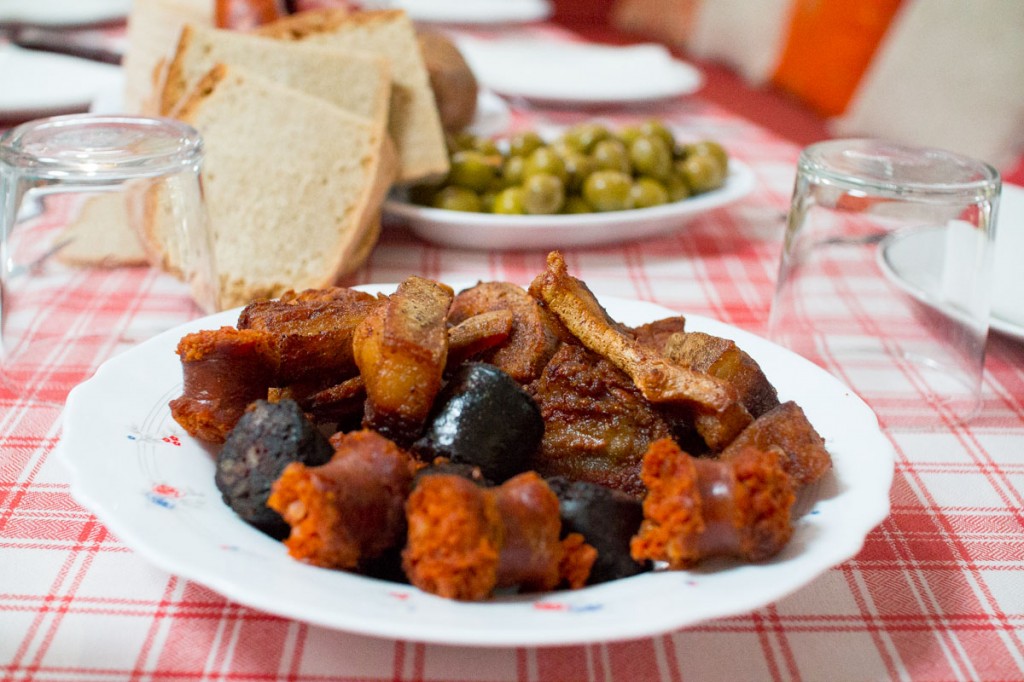 But all this is done after having a hearty breakfast, because the food isn’t served until all tasks are done. A ‘matançes’ day breakfasts usually consists of ‘sobrasada’ and ‘butifarra’ from the previous year, olives, fried or pickled ‘mackerel’, fried loin, nuts, homemade Ibizan cheese, sweet fritters, ‘orelletes’ (a typical Ibizan pastry), coffee and ‘vino payés’ (literally peasant wine, is homemade Ibizan wine) to accompany.

After everyones has had breakfast, as of this moment, men are responsible for burning the pig’s hair and cleaning the animal for further buchting. The meat will be reserved for making sausage, however, bones and bacon are salted and preserved for preparing dishes such as ‘ossos con col’ (bones with cabbage) and some of the lean meat (loin, sirloin, ribs) are reserved for the main food of this day, ‘sa amtança’. Meanwhile, women are in charged of cleaning the pork belly with hot water and sour oranges so it can later be filled for making the delicious sobrasadas. The ‘nora’ is one of the most valuable parts as this will be the thickest part which is reserved for the summer. It is also the task of the women of the house to help prepare the dinner that will end the day of ‘sa matança’. 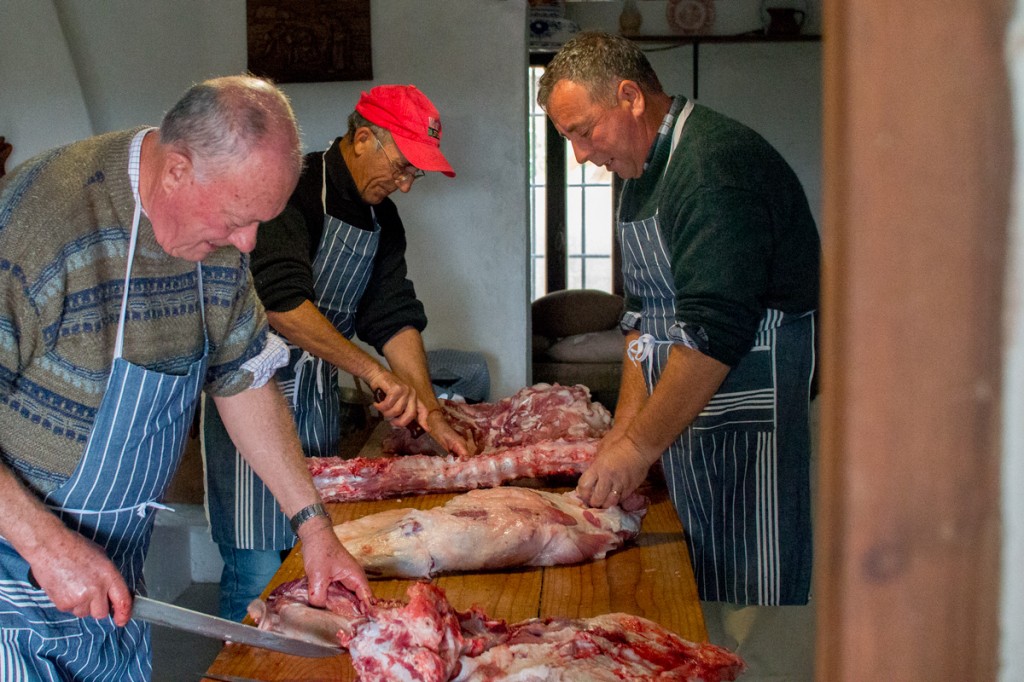 Once the animal is butchered, meat and fat is spread on the work tables in order to chop it into smaller pieces. The leanest parts will be used to make the sobrasadas and the more bloody parts with more nerve are reserved for the butifarra and botifarrons. First, the meat and fat is grinded and pressed for making the ‘butifarra’. Meanwhile, water is heated in a large pot for cooking it. 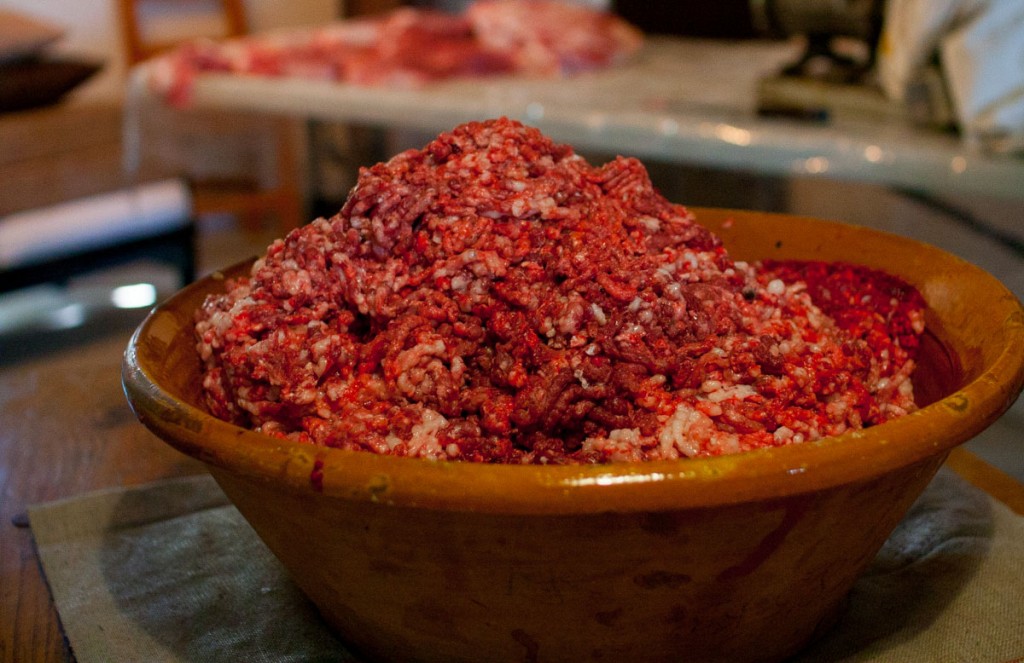 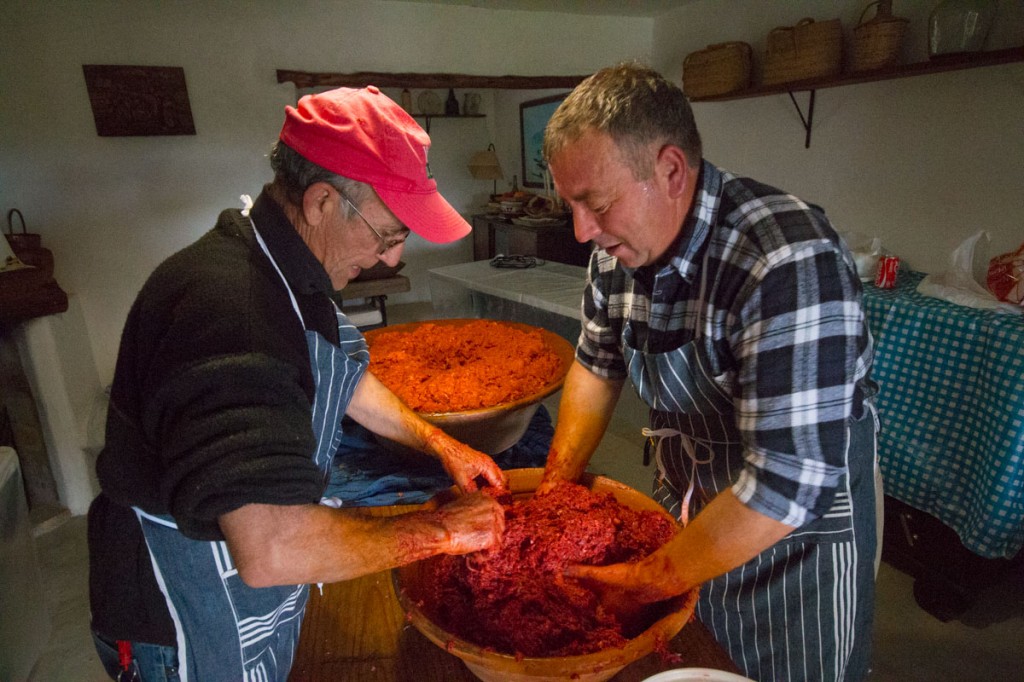 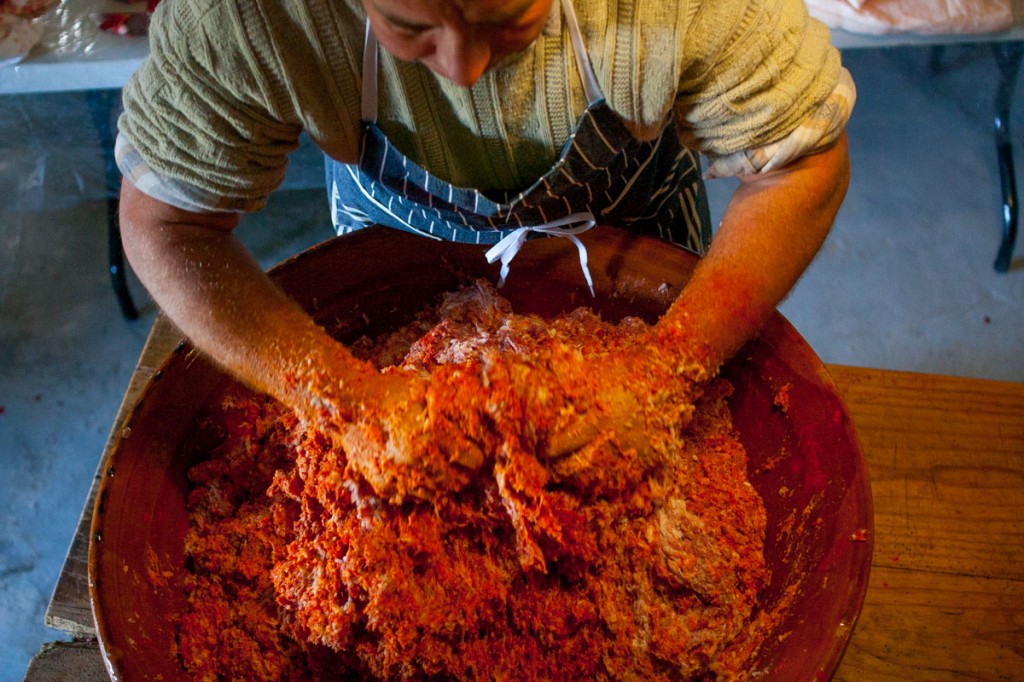 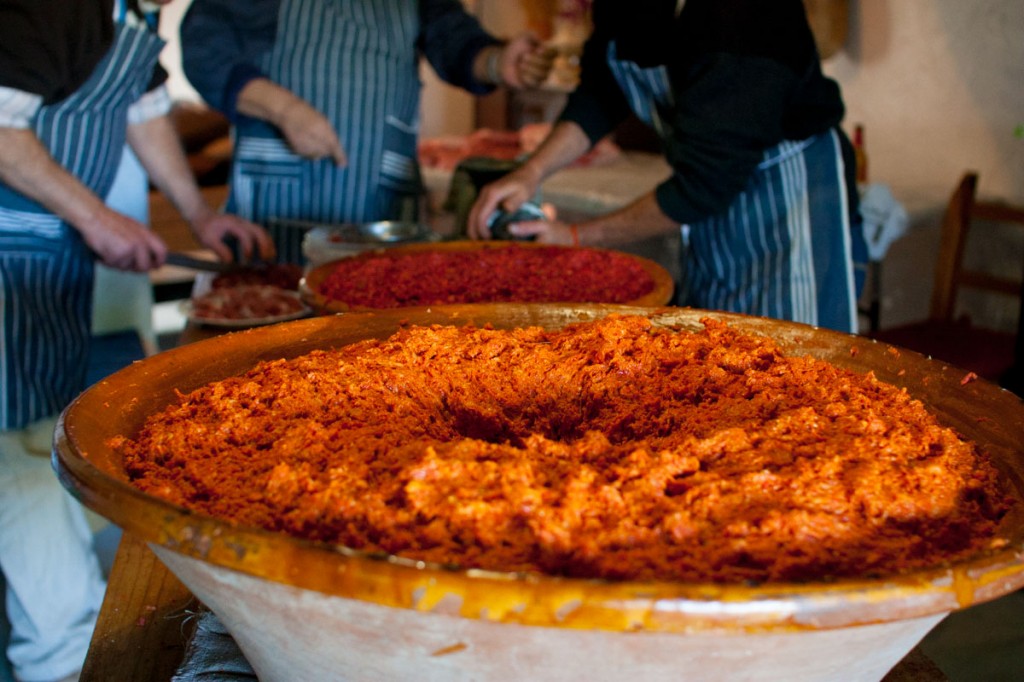 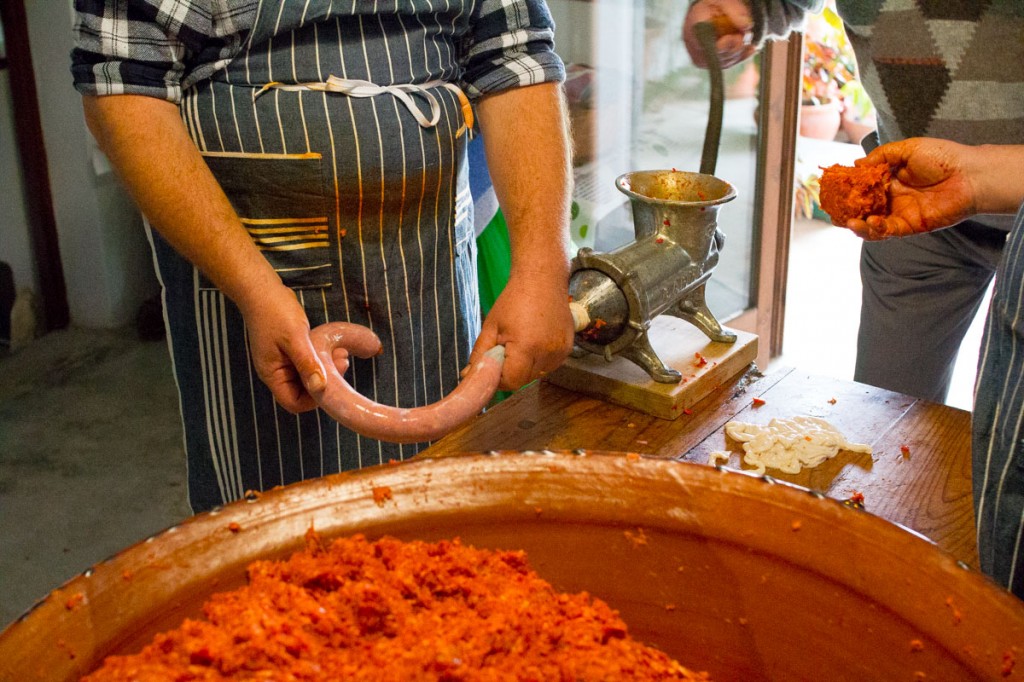 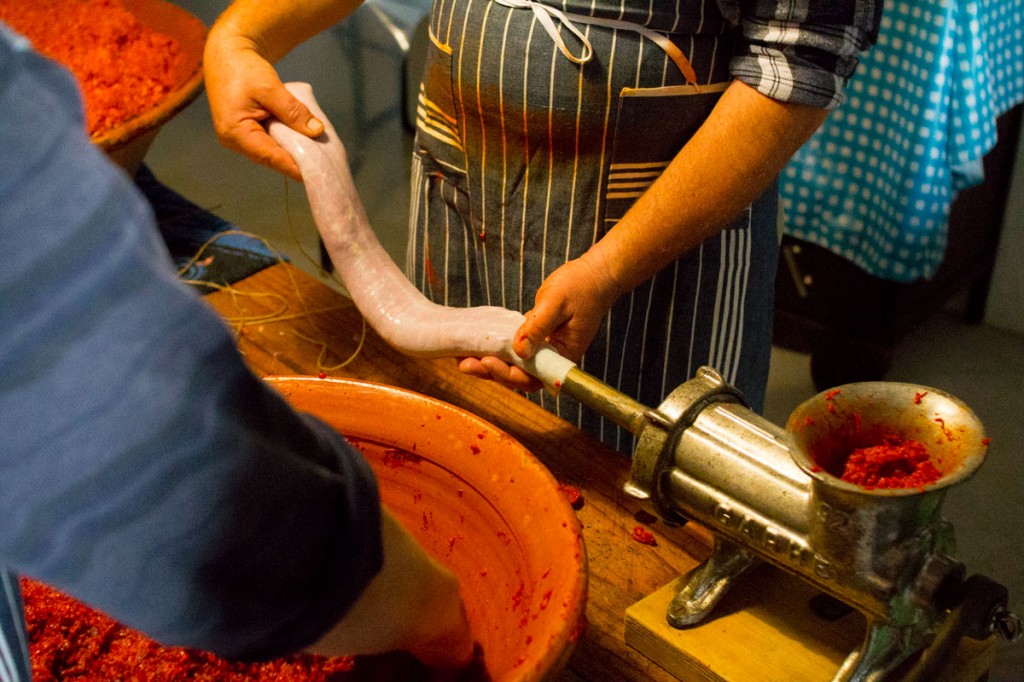 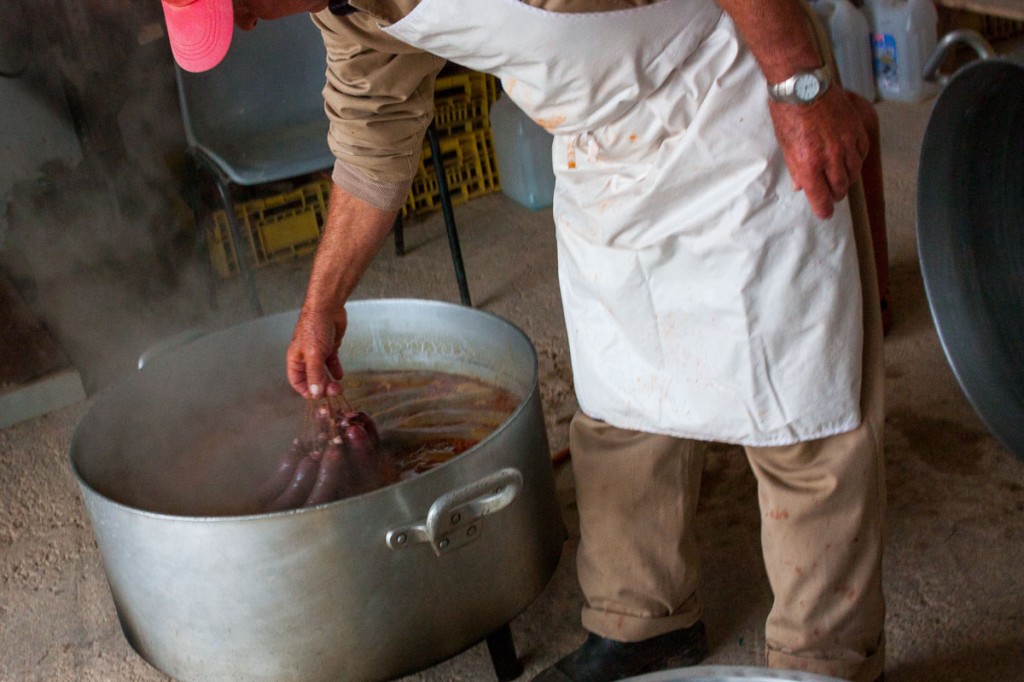 Men also perform the arduous task of grazing the meat used for the filling of the sobrasadas. To do this, they mince the meat and mix it in a ‘Llibrell’ bowl with salt and a spice mixture, using white and black pepper, sweet and spicy paprika which gives it that characteristic colour and in some cases they add cloves and nutmeg to make this type of sausage. Each house has its own taste when making ‘sobrasadas’ and that is why they do the ‘tast’ or tasting, that will determine whether the meat is well grazed and spiced to be stuffed. If the taste satisfies everyone, they start with the sausage making phase where women are also involved.

Once all ‘sobrasadas’ and ‘butifarras’ are made, they are tied and hung to cure on a hanger in the rafters of the house. It will take two weeks to try the first ‘sobrasadas’ while the ‘butifarra’, which is boiled in order to contain the blood, can be tried and eaten the same day is made. After all the the tasks have been done the real party begins, people gather around the table and eat together the food that has been prepared throughout the day. The main courses on this day are ‘arroz de matanzas’ and ‘frita de matanzas’. Typical hearty dishes from Ibizan gastronomy that reward the hard work done throughout the day. After dinner the celebration continues with music and traditional games because this is a day of family and friends reunion and besides working hard they also celebrate and have fun.