Sant Josep de sa Talaia is one of the most interesting municipalities for discovering the natural and cultural heritage of the island of Ibiza. This is thanks to such unique places as Sa Caleta as well as the sea prairies of Posidonia Oceanica, an important species within the marine ecosystem and the predominant type of flora on the Ibizan seabed. These are two of the island’s precious treasures that, along with the old city of Dalt Vila and the necropolis of Puig des Molins, were declared World Heritage Sites by UNESCO in 1999 under the title of “Ibiza, Biodiversity and Culture”.

The Mediterranean Sea contains species of incalculable ecological value, and within this richness and diversity, we may highlight the vast Posidonia Oceanica sea meadows that grow throughout the underwater territory of the Pitiusan islands. At first glance it may seem like just another sea plant, but in fact it is an essential part of the Mediterranean marine ecosystem, as it supports many other lifeforms.

One of the first things to note about Posidonia Oceanica, also known as Neptune Grass, is that it is not a simple algae as many think. It has roots, stems and leaves which bloom in autumn, bear fruit in spring and perform the function of photosynthesis, features that classify it as an underwater plant. Thanks to its process of photosynthesis, it keeps the sea continuously oxygenated, providing cleaner waters and an ideal environment where a wide variety of species can thrive. We may say that this plant serves the same function as that of a tropical forest in that it is home to a rich biodiversity and the “lung” which provides oxygen to the surrounding fauna and flora. As a result, complex ecosystems are created, with Posidonia acting as a biomarker for gauging marine health.

Its importance is not only perceived underwater. Posidonia Oceanica also influences the formation of the coastal landscape. Without it, the beauty of the Pitiusan beaches would not be possible. Posidonia usually grows near the coast in shallow, sandy sea bottoms. This helps to purify the water sediments and keep the seabed and shoreline in place. in other words, it performs the same protective function as a coral reef would. Once the leaves of this plant wither, waves deposit them on the beach, which prevents the sea from eroding the coast and allows other related ecosystems to develop as is the case of the dune ecosystem and the pine and juniper coastal forests ecosystem. Therefore, we could say that the Posidonia Oceanica is the basis from which the other Pitiusan coastal ecosystems originate, a protective and purifying plant that enhances the wonderful beaches of Eivissa and Formentera.

In the old days, the inhabitants of the island were not familiar with all of the virtues that this marine plant has, and which today are vital to the preservation of Mediterranean natural values. But in fact, they did realize it was a natural resource of great utility that served not only as insulation for the roofs of traditional island houses, but also as a natural fertilizer for the fields. Neptune Grass, without a doubt, is a marine species with many qualities and utilities.

Posidonia Oceanica predominates throughout the Mediterranean but in the area of ​​Ibiza and Formentera is probably the biggest protagonist of the sea. Without it we would not be able to conceive the landscape of the islands as it is. Its importance is so great that in 1999 UNESCO conferred World Heritage status on it, the first natural good in the Mediterranean to receive this award recognizing its beauty and uniqueness. The declaration of Ses Salines of Eivissa and Formentera as a Natural Park in 2001, also marked an important step for its preservation as more than 13,000 hectares of seabed, where the Posidonia Oceanica predominates, were also included within this protection. A curious fact is that within this perimeter, in 2006, one of the most important specimens of this species was discovered, an area over eight kilometers long and 100,000 years old.

In short, the Posidonia Oceanica is essential in understanding the Pitiusan marine environment, and appreciating where all the life one sees on its shores begins. Without it, we would not be able to enjoy the wonderful Mediterranean beaches with their crystal clear waters. Therefore, today the conservation of this species is vital in keeping this landscape as we presently know it 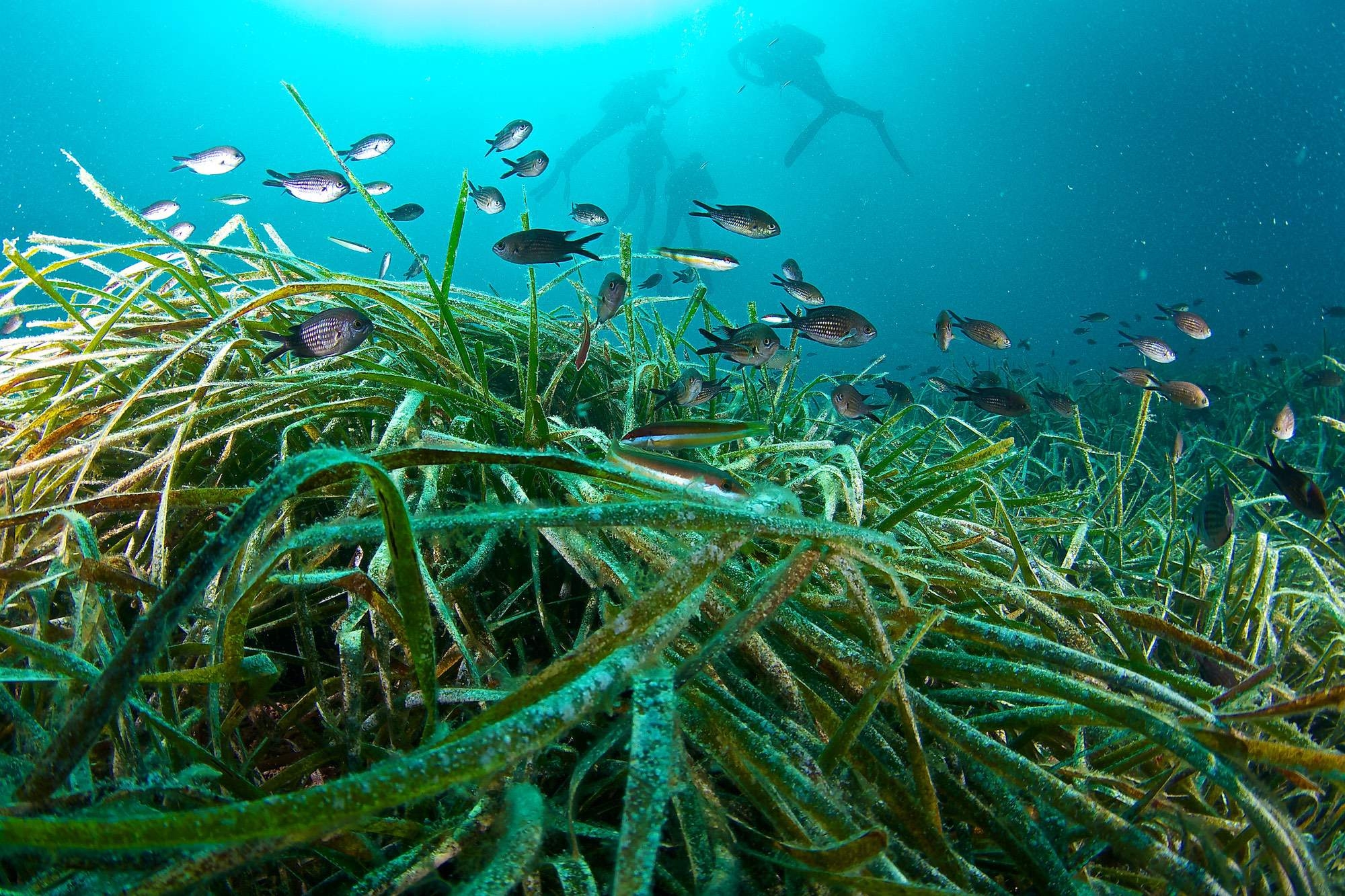 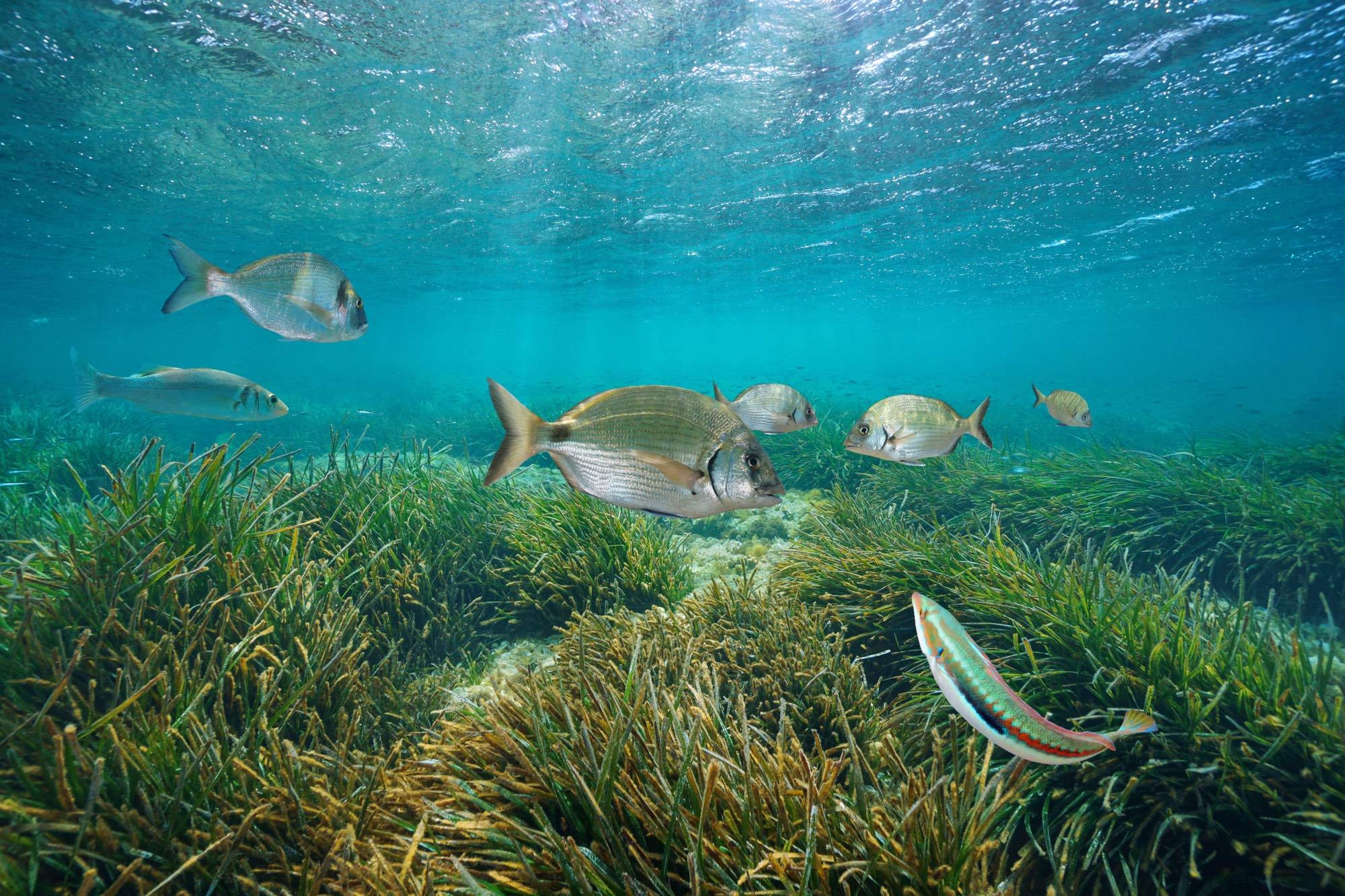 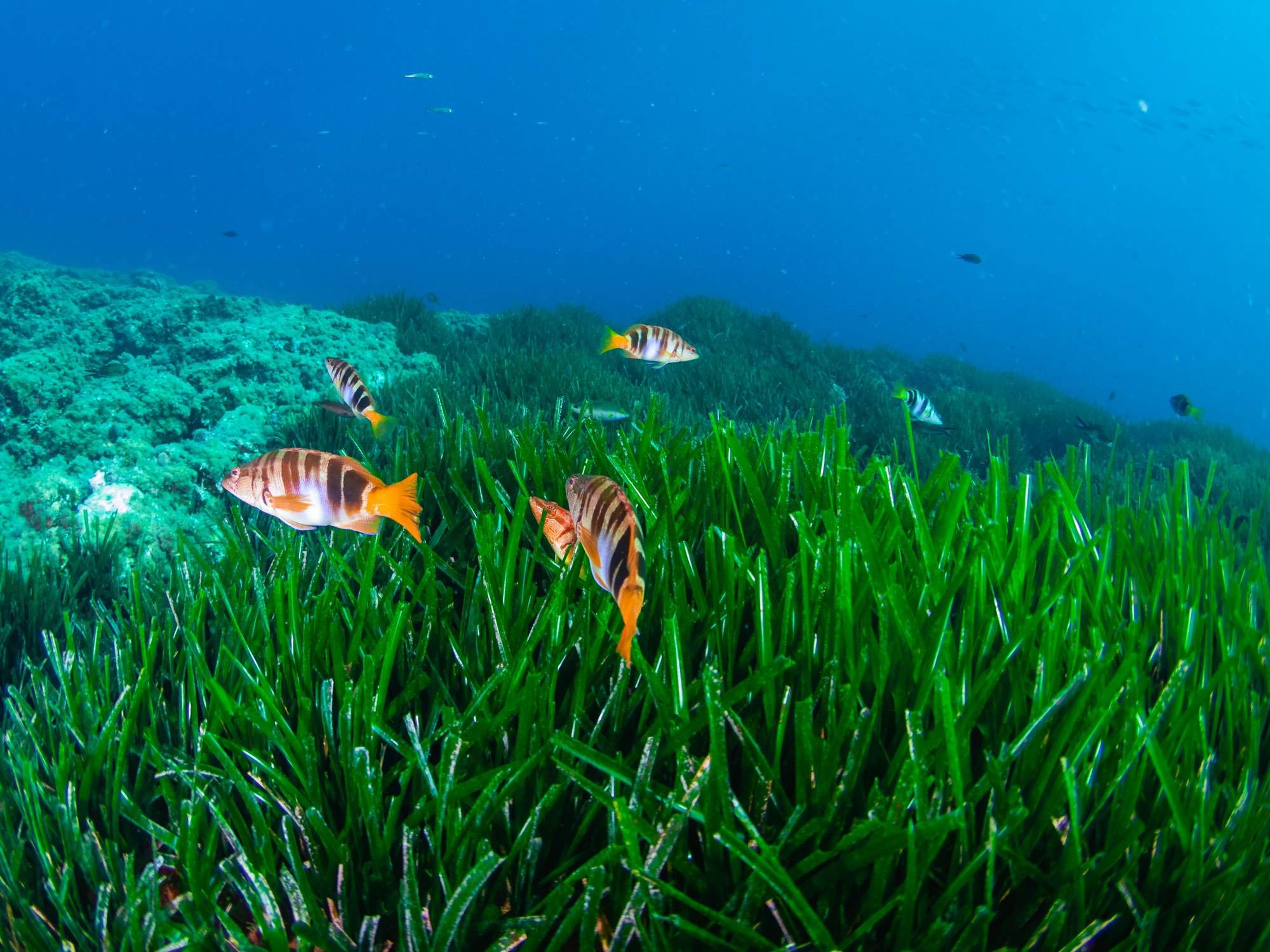 One of the most interesting enclaves for learning more about the history of the island is the ancient Phoenician settlement of Sa Caleta. It is an archaeological site dating back to the 8th century B.C. Its importance derives from the fact that it is the first Phoenician settlement found on the island of Ibiza, and therefore, offers valuable information for understanding better how these first settlers lived.

The settlement is located in the southwest of the island, in the municipality of Sant Josep, between the beaches of Es Codolar and Platja des Jondal. The specific location is a small peninsula called Mola de Sa Caleta, a strategic place for founding an outpost thanks to its excellent visibility, alerting the inhabitants to possible incursions. This site is also endowed with a small cove, well sheltered from the winds, which was used as a port.

The site is divided into several areas known as quarters. Specifically there is the north-west quarter, the central quarter and the port quarter which currently cannot be properly appreciated because of erosion over the years. Nevertheless, the south quarter does allow us to learn how the settlement was organized because it is the only one that has been preserved properly. This has facilitated archaeological investigations which have provided important information about these people.

It seems that in the beginning, the settlement sprang up haphazardly, but as the population grew, it began to be built in a more planned way with the houses placed closely together in a well-conceived urban layout. The settlement evolved from the juxtaposition of dwellings and workshops with streets that allowed passage amongst the buildings. In some corners small plazas were formed, which constituted the common areas. At the site we can find houses with up to seven rooms, all of them built from masonry walls with small and medium stones and roofed with pinewood and clay, which made them waterproof.

Also, on the site are two circular ovens, two meters in diameter, that were used for casting the argentiferous galena, the predominant metal in the area. This leads to the conclusion that this was one of their main economic sources, but from the remains found, it can be assumed that livestock, agriculture, salt production and fishing were also important activities in this settlement. Thanks to the privileged location and activities developed here, one can say that this was a key point of maritime trade with the Iberian Peninsula, serving as a stopover on many trade routes.

It is estimated that, at the time of its maximum habitation, the site had up to 500 settlers, making it comparable to settlements of similar characteristics located in the south of the Iberian Peninsula. Although the growth of the Sa Caleta was prosperous, its establishment was temporary because, circa 600 B.C., it was completely abandoned in a peaceful way according to the archaeological data obtained. It is likely that its inhabitants migrated to what in the future would become the present city of Ibiza although this cannot be known with absolute certainty.

Therefore, Sa Caleta is a unique spot in the municipality of Sant Josep where you can see the first steps of the settlers on the island, a key part to the cultural mosaic that makes up the history of Ibiza and the Mediterranean as a whole. For these reasons, it was declared a world heritage site in 1999, along with other important sites such as the Necropolis of Puig des Molins and the old city of Dalt Vila. “Ibiza, biodiversity and culture” was globally recognized. 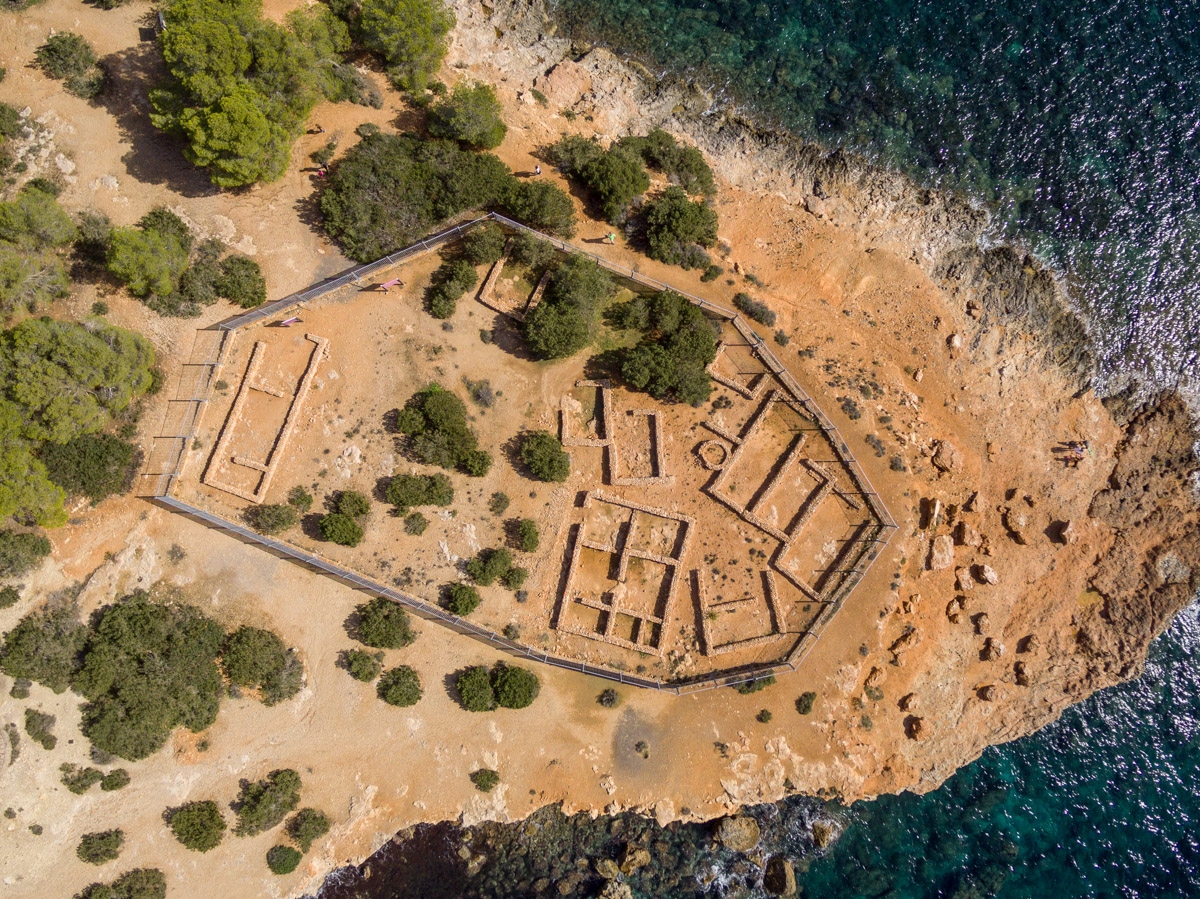 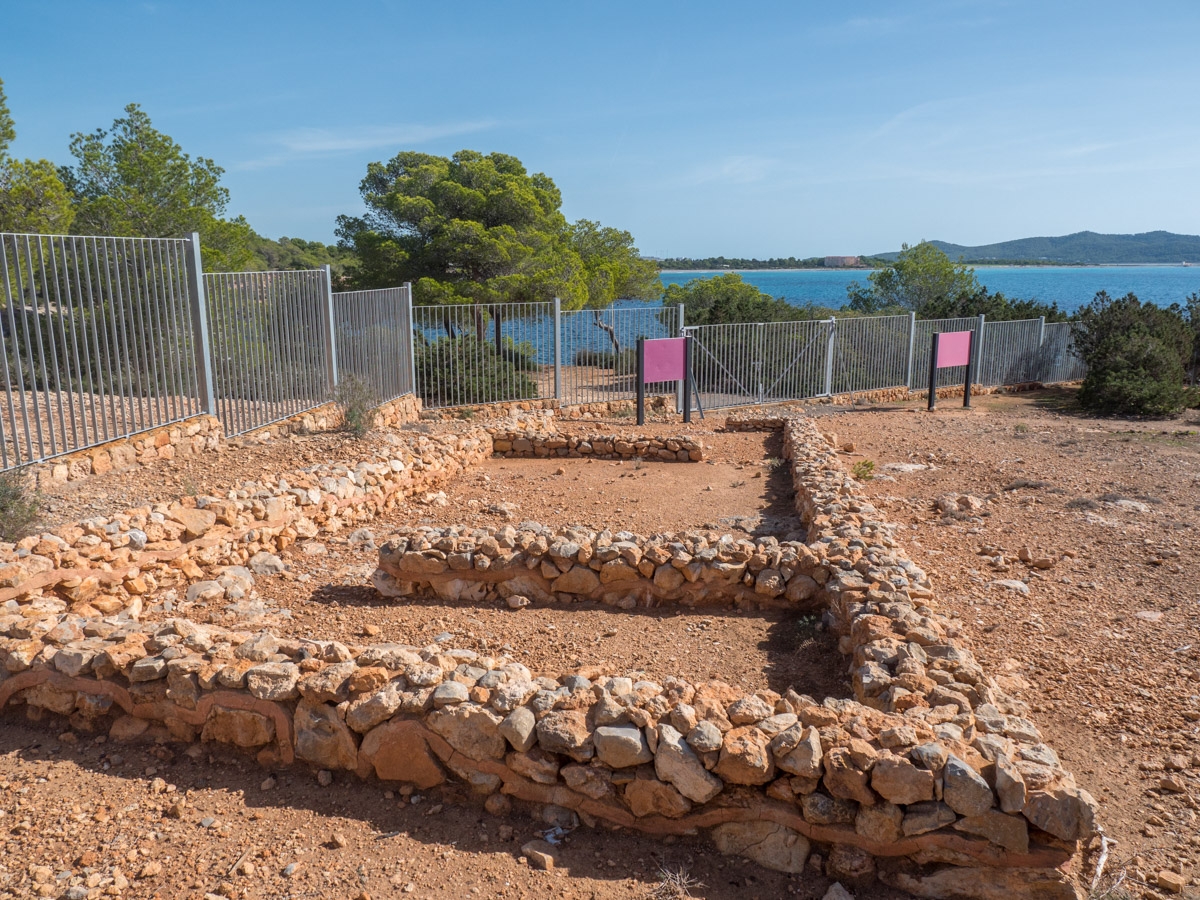